Amazon and Ford backed ‘Rivian’ Gears up for Nasdaq Debut, Tesla Bounces Back

Electric vehicle maker, Rivian Automotive makes its debut on the Nasdaq later today with one of the highest IPOs among its peers and the timing couldn’t be more perfect. A few hours earlier at the COP26 Climate Change Summit, a group of countries and companies committed to phasing out fossil-fuel vehicles by 2040, in an attempt to reduce emissions and halt the effects of global warming.

It should be noted that prominent players in the automotive sector such as Germany, USA and China were not included in the agreement along with the top two car makers Toyota and Volkswagen. Nevertheless, the tide seems to be turning as individuals and now companies and governments are agreeing to definite time frames to eliminate fossil-fuels.

Rivian began in 2009 and launched its fully electric R1T pickup truck in September. Since then it has received approximately 55,400 orders for the model and looks set to ram up production in the coming years as the company’s current pace has it taking over 60 years to fulfil the current order.

At the time of writing, Rivian has not yet begun trading but is anticipated to open around $120 -$125, 60% higher than the initial offer price according to reports.

On the technical front US Tech 100 has appeared overbought – as confirmed by the RSI indicator – but is yet to drop below the 70 mark on the daily chart which leaves the door open for further price appreciation.

However, a stronger dollar and worrying CPI inflation data out of the US (6.2%) could weigh on the index as consumers continue to be pressured with the higher costs passed down by firms. 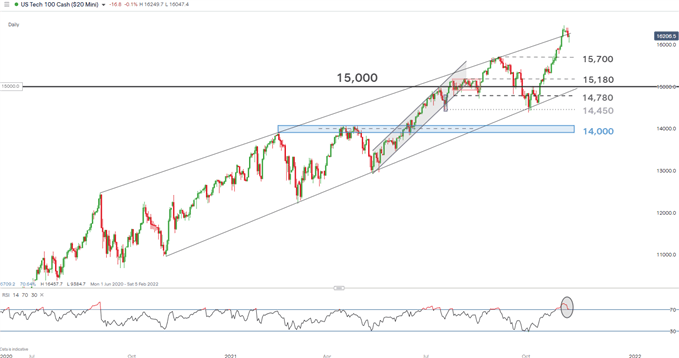 Tesla Sell-Off Takes a Breather After Approaching the $1,000 Mark

Elon Musk’s Tesla witnessed a near 20% drop since a controversial Twitter poll decided that the South African-born entrepreneur sell his shares in light of recent debate over wealthy billionaires avoiding tax via unrealized gains.

However, the dust appears to have settled, at least for now, as early trade on Wednesday saw the share price trading more than 4% higher on the day. 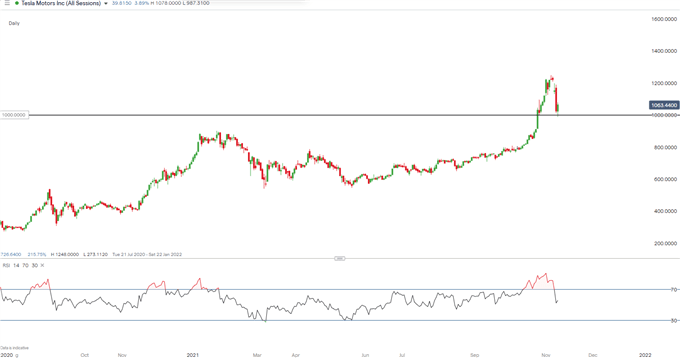 The Power Of Asking The Right Questions