As a New Retail Trader Age Rises, Heed Tales of Past Manias

In spring 2020, the temporary closures of professional sports leagues during the initial coronavirus pandemic lockdown, coupled with the infusion of fresh capital into financial markets by the Federal Reserve and US Treasury, anointed a new class of retail traders in financial markets. This wave of new market participants brings with it a wave of liquidity that had been otherwise out of the reach of traditional financial markets.

While the past few months may have been exhilarating for retail traders it is a good time to look back into history for some informative cautionary tales from other retail manias in financial history. Here is a look at past events, emotions and drama that led past traders to seek fortune from similar environments only to leave many struggling with the subsequent ruin.

In capital markets, liquidity will always find its own level. Financial capital will flow into the coffers of even the most insolvent companies when there is an abundance of liquidity. Consider the example of Hertz.

Bankruptcy at its core is a situation in which a company’s assets are worth nothing. If assets = liabilities + equity, then it must be the case that a company in bankruptcy has seen its equity wiped out, driven to zero value. And yet, retail traders continued to trade into Hertz, pushing the firm’s shares higher.

In a sense, this is what policymakers such as the Federal Reserve and US government intended: shore up the economy against the scourge of the pandemic so that a recovery can take root. In turn, there is so much excess liquidity in capital markets, that businesses would be spared from illiquidity in the short-term and insolvency in the long-term. This can be summed in an analogy whereby despite ‘the holes in the bottom of the cup, the top would still overflow.’

Learn from Others’ Mistakes

Another quote that carries weight with this introspection is one that my father would say to me when I was a child: “smart people learn from the mistakes of others.” The history of financial manias – not unlike the one we’ve witnessed since the start of March with the wave of new retail traders opening brokerage accounts – frequently involves retail traders who have enjoyed a brief period of success followed by sustained discomfort.

Our hope here is to highlight some of the lessons from financial market history to other episodes of retail mania, when those with little experience in speculation ventured into capital markets regardless. The lesson is clear: at some point, the music stops. The punch bowl gets taken away.

The first and perhaps most famous bubble in financial history can be dated back to the 1600s. At the peak of the tulip mania, some single tulip bulbs, with no real economic use, sold for more than 10x the annual income of a skilled craftworker (the ‘bubble ratio’). For reference, with Amazon shares trading under $3,000, and the median American family income clocking in near $60,000, this ‘bubble ratio’ is still just 0.05).

It didn’t take long until the bubble was unsustainable, with speculators unable to purchase even the lowest quality bulbs at their cheapest prices. When demand disappeared – there was no one left to buy – the tulip bubble burst almost overnight, driving many into lifelong debts.

The Tulip mania took place from 1636-1637, and yet nearly 400 years later we find ourselves discussing the pitfalls of what happens when too many retail traders speculate on assets that have no tangible economic use or value. Why are new retail traders, with a median age of 31, investing in a bankrupt company like Hertz? Evidently human nature has not changed.

The most famous market crash in American history took place at the tail-end of the 1920s, capping an era of excess known as The Gilded Age. What was not so spectacular in this historical period the tepid build up. While there wasn’t an acute bubble, it was still ended by a dramatic drop. 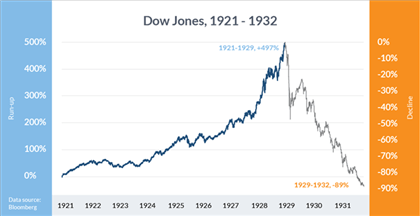 Indeed, the gains during the preceding decade were relatively tame by comparison to other major speculative bubbles. The plunge was spectacular, with the Dow Jones Industrial Average losing nearly 90% of its value from September 1929 to July 1932. The ensuing economic fallout from the stock market crash became what is known as The Great Depression.

The era of deregulation starting in the 1980s eventually converged with the rise of technology and internet stocks. The birth of the ‘new economy’ drove markets to dizzying heights by 2000. The NASDAQ rallied from 743 at the start of 1995 to a high of 5048 on March 10, 2000. From October 1999 to March 2000 alone, the index doubled, creating the ‘dot com bubble.’ 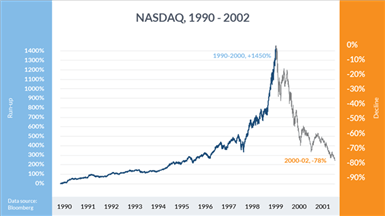 Thanks in part to the recession brought on by the September 11 terrorist attacks, the dot com bubble burst and by late-2002, the NASDAQ had lost approximately 78% of its value relative to its high in March 2000.

The housing market bubble is a unique bubble insofar as it was blown to help reinflate the economy after the 2000 NASDAQ/dot com bubble burst. To help the economy recover from the September 11 terrorist attacks and ensuing recession, the Federal Reserve cut interest rates and flooded the market with liquidity – similar to today. Real estate prices and the valuations of homebuilders soared, drawing speculators into the housing market, known as “flippers”. Today, we have AirBNB hosts.

When the housing market bubble burst, the S&P 500 Homebuilding Total Return Index fell by 90% from its peak in July 2005 to its low in November 2008. The result of the stock and housing market crash was the worst financial crisis since The Great Depression, an era that we now called The Great Recession.

Putting These Lessons to Work

Mark Twain is known for many things, but one of his allegories with particular application to current conditions and that you’re liable to hear: “history doesn’t repeat itself but it often rhymes.” The emotions that governed our predecessors are the same ones that we deal with today when engaging in financial markets: greed, fear, excitement, disappointment, among others.

In an age of global interconnected communications, information and data travels around the world faster than ever. This means that the emotions we deal with when trading can coalesce and snowball much faster in a global marketplace. Has this increased the propensity for misinformation? Perhaps. But if history is our guide if only by rhyme and not repetition, then we should be wary of the fact that financial bubbles, crises, and crashes are more susceptible to occurring than any other time in history.

All the Little Ways Having a Pet Benefits Your Health