AUD/USD Bears May Remain In Control as Chinese CPI Disappoints

China’s June Consumer Price Index (CPI) disappointed on Friday morning, coming in at 1.1% against an expected reading of 1.3% on a year-over-year basis. The Producer Price Index (PPI) for June was in line with estimates, coming in at 8.8%. The data will certainly catch the attention of Beijing, who just this week publicly stated their intention to implement further monetary easing to help the economy. The slightly disappointing prints come amid a period of sustained strength for the Greenback against the Offshore Yuan (CNH). Dollar strength of late comes on the heels of hawkish commentary during the June Fed meeting, along with a “flight to quality” as risk assets gyrate.

AUD/USD remains under pressure following a difficult week for risk-on FX. Renewed virus fears in Australia prompted sellers to exacerbate recent downside momentum, and additional risk-off sentiment was fueled by a decline in US equities and bond yields. The US Dollar benefitted tremendously from the “flight to safety,” in a week where both bonds and safe-haven currencies caught a bid. Falling bond yields in the US potentially highlight that the market is pricing in lower growth coming out of the pandemic, which may further stoke risk-off sentiment and drive AUD/USD lower. Currently, the pair has traded down to its September swing high and is approaching oversold territory on the daily RSI.

Global markets have faltered this week as investors worry about the ongoing crackdown emanating out of China. Beijing has targeted foreign-listed Chinese companies in its most recent outlash against domestic technology conglomerates. Stemming from the failed IPO of Jack Ma’s Ant Financial last fall, regulatory scrutiny in China has reached new heights as Beijing publicly targeted Didi Global, just days after the company listed publicly on the New York Stock Exchange. The focus of the tirade centers on data privacy, with Beijing not satisfied by the disclosures Chinese companies must make before trading publicly in America. 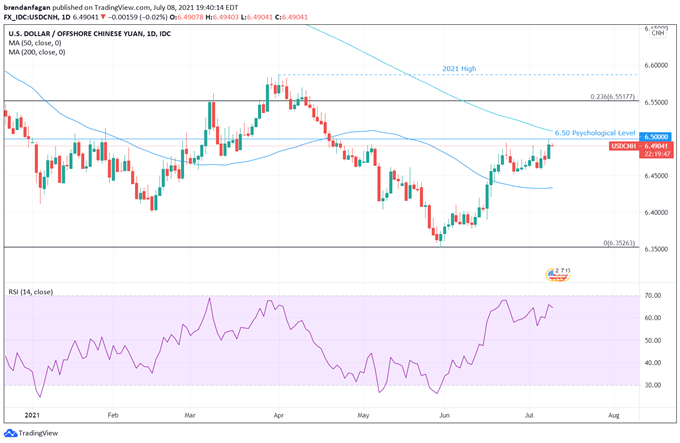 China is also stoking fear among global investors after a statement from the State Council hinted at additional easing. “Given the impact of higher commodity prices on business production and operation, the meeting decided to maintain the stability of the monetary policy and enhance its effectiveness…” said Premier Li Keqiang. The statement added that cuts in the required reserve ratio along with other policy tools may be implemented should they be required. The change in monetary policy in China comes as the Federal Reserve prepares to tighten and remove pandemic-linked stimulus and recovery measures.