AUD/USD extends the advance following the Kansas City Fed Economic Symposium to break out of a descending channel from earlier this year, and the exchange rate may stage a larger recovery over the remainder of the week as it trades above the 50-Day SMA (0.7375) for the first time since June.

AUD/USD extends the recent series of higher highs and lows as the ADP Employment report warns of a slower-than-expected recovery in the labor market, and the US Non-Farm Payrolls (NFP) report may also generate a bearish reaction in the Greenback if the update encourages the Federal Reserve to maintain the current course for monetary policy.

Signs of a less robust recovery may keep the Federal Open Market Committee (FOMC) on the sidelines as Chairman Jerome Powell insists that “we have much ground to cover to reach maximum employment,” but a stronger-than-expected NFP report may undermine the recovery in AUD/USD as it puts pressure on the Fed to normalize monetary policy sooner rather than later.

Meanwhile, the Reserve Bank of Australia (RBA) may find it difficult to defend its wait-and-see approach for monetary policy as the 2Q Gross Domestic Product (GDP) report instills an improved outlook for the Australian economy, and it remains to be seen if Governor Philip Lowe and Co. will adjust the forward guidance at the next interest rate decision on September 7 as the central bank “would be prepared to act in response to further bad news on the health front should that lead to a more significant setback for the economic recovery.”

Until then, data prints coming out of the US are likely to sway AUD/USD as Chairman Powell acknowledges that “if the economy evolved broadly as anticipated, it could be appropriate to start reducing the pace of asset purchases this year,” but a further recovery in the exchange rate may fuel the flip in retail sentiment like the behavior seen earlier this year. 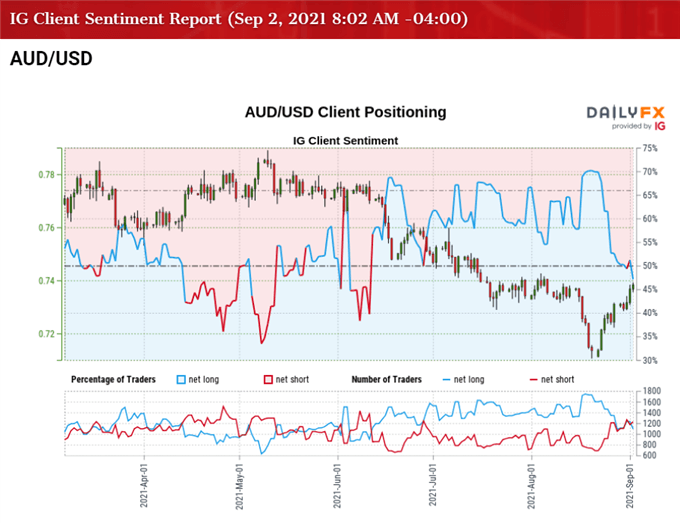 The IG Client Sentiment report shows 47.18% of traders are currently net-long AUD/USD, with the ratio of traders short to long standing at 1.12 to 1.

The number of traders net-long is 3.94% lower than yesterday and 16.19% lower from last week, while the number of traders net-short is 12.35% higher than yesterday and 11.49% higher from last week. The decline in net-long position could be a function of profit-taking behavior as AUD/USD trades above the 50-Day SMA (0.7375) for the first time since June, while the rise in net-short interest has fueled the shift in retail sentiment as 50.84% of traders were net-long the pair at the start of the week.

With that said, recent price action raises the scope for a larger recovery in AUD/USD as it extends the series of higher highs and lows from earlier this week, but US data prints may sway the exchange rate ahead of the next RBA meeting as the Fed appears to be on track to switch gears later this year.

Aching Joints? You May Want to Try Chondroitin