Home Forex and Stocks AUD/USD May Move on RBA, Covid, China, US NFPs

AUD/USD May Move on RBA, Covid, China, US NFPs

Asia-Pacific markets look set to benefit from a rebound in trading sentiment after stocks moved higher on Wall Street. The risk-sensitive Australian Dollar is gaining against the safe-haven US Dollar. Bond traders shifted out of Treasuries, pushing the benchmark 10-year note’s yield 3% higher at the New York closing bell. The moves across US equities, FX and government bond markets reflect a brightening mood as the week comes to a close.

The Aussie Dollar’s strength comes despite record cases in Sydney, Australia’s most populated city. The New South Wales state capital reported 262 new Covid infections on Thursday, with the Delta variant driving case counts. Six weeks of lockdowns in Sydney, joined by Melbourne and Brisbane – the next two most populated cities in Australia respectively – threaten to shrink GDP growth in the coming quarters. If output contracts in Q2 and Q3, the nation would re-enter a technical recession after just pulling out of one last year. That would mark a second one in just two years.

Elsewhere, China is starting to see sporadic outbreaks turn into widespread city-level events, also driven by the Delta variant. Outbreaks from Wuhan to Zhangjiajie are challenging the communist party’s hardline containment measures that saw success in the initial pandemic wave. Chinese economic data have been mixed in recent weeks, causing some to fear that global growth may slow at an accelerated rate.

If China’s outbreaks worsen and lead to heightened restrictions, the Australian Dollar will likely come under heavy pressure. The currency often acts as the market’s favored liquid proxy of the Chinese economy. That is because China is Australia’s largest trade partner. The Aussie Dollar gained after the Reserve Bank of Australia (RBA) kept its planned asset purchases reduction intact earlier this week.

Speaking of the RBA, today will bring a freshly updated statement on monetary policy. It should help shed more light on the central bank’s actions from this week’s decision. RBA Chief, Philip Lowe, will also be speaking before a government economic committee today. Lawmakers are expecting to press Mr. Lowe on the central bank’s balance sheet decision.

That said, AUD/USD may see some potential volatility in today’s session. At the same time, traders are gearing up for the US non-farm payrolls report due out before tomorrow’s New York opening bell. Economists expect the economy to add 870k jobs in July, up from 850k in June. A better-than-expected print may fuel some Fed rate hike bets, which could push the Australian Dollar lower versus the Greenback.

AUD/USD has made moderate upward progress since hitting a fresh 2021 low back in July, climbing over 1% since then. A Rising Wedge pattern is taking shape, however, putting new bearish pressure on prices. The most recent higher high within the wedge pattern came at the falling 26-day Exponential Moving Average (EMA) after breaking prior resistance from the September swing high. With that in mind, traders should be cautious of a bearish breakdown in the near term, particularly if prices drop back near the wedge’s support trendline. 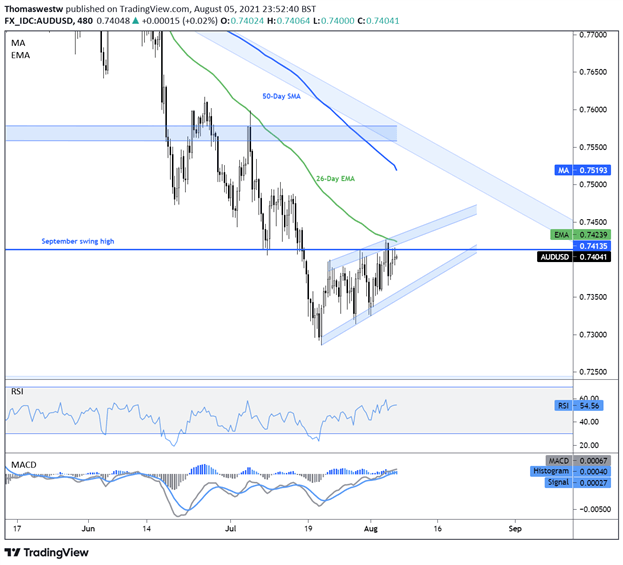