RBA and BoJ Lag Behind other Major Central Banks

The Reserve Bank of Australia (RBA) has gone to great lengths to communicate to the market that it will remain supportive for as long as is necessary. In its recent statement on monetary policy for February, the Bank expects GDP to have reached 5% for 2021 despite Omicron and related lockdowns. The labor market has also tightened with unemployment as low as 4.2% in December and inflation, while heating up, is some distance away from levels experienced in the US or Eurozone. Ultimately, the Bank is satisfied with the current trajectory of monetary policy and remains accommodative as long as inflation remains within the 2 to 3 percent target range.

Despite the RBA’s dovish stance, shorter term bond yields have shot up in 2022, buoyed by a significant 140 basis points worth of implied rate hikes via rates markets. In general, as rates differentials increase, the ‘carry trade’ starts to gain traction once again which would support the Aussie dollar against the Yen. 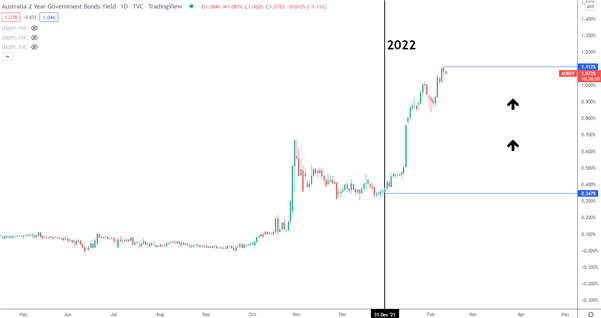 Earlier today the Bank of Japan’s Nakamura reinforced the Bank’s dovish stance after stating the BoJ must maintain its current easy policy until wages begin to grow steadily. In addition, Governor Kuroda mentioned that chances of a large jump in inflation are low and supports accommodative policy as inflation remains below 2%.

Dovish comments are typical from Japan’s central bank however, in mid-January, news broke that the Bank was debating messaging on eventual rate hike – by far the most hawkish development in years – which ushered in a period of JPY buying.

Diagram of Central Banks on the Hawkish/Dovish Spectrum 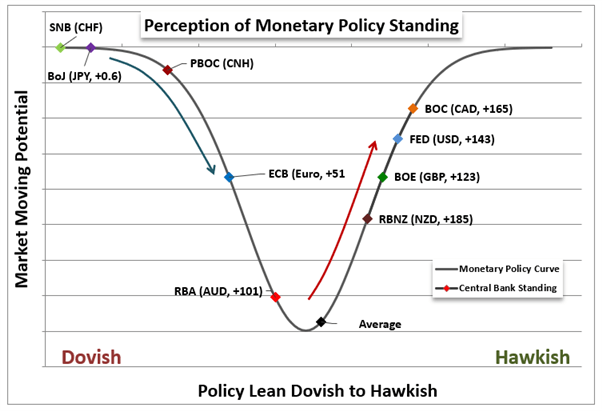 Given the close correlation the Aussie dollar has to risk assets such as the S&P 500, today’s US CPI print could elevate AUD volatility. Tomorrow RBA Governor Lowe is set to speak to end off the week. Next week we have the Japanese Q4 GDP (preliminary) figure followed by RBA minutes and next Thursday we can expect Australian jobs data. 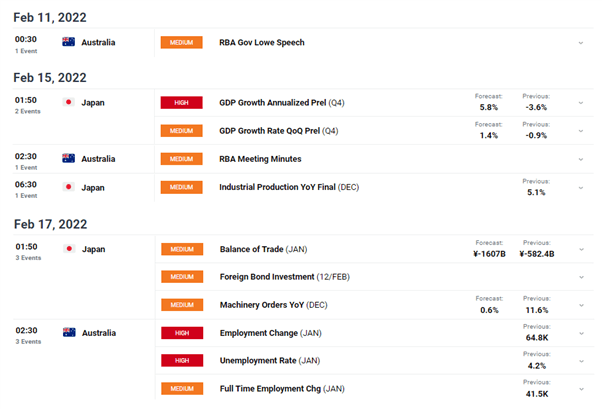 While the initial guidance targeted a 24-48 hour time horizon, the reversal has really taken off since, warranting a closer look. After 3 days of a strong bullish continuation, nearest resistance sits at 83.75 and then 84.29. The relative strength index currently approaches overbought territory but still has some room to run before we may see a pullback. 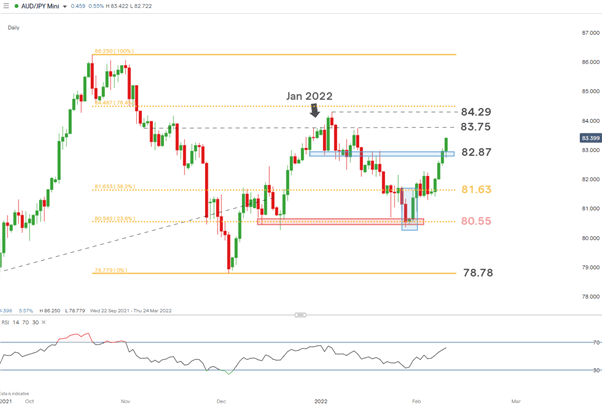 In the event we see a retracement, 82.87 provides support and a possible launchpad for bullish continuation but a deeper move towards the 81.63 level could prove problematic for AUD/JPY bulls and would necessitate a re-evaluation of a bullish trading bias. Thus far, the pair has seemed rather immune to escalations between Russia and Ukraine however, this remains a huge potential risk to the current shorter-term trend due to the safe haven characteristics of the Yen in the event of an invasion.

No App for This