Bitcoin’s (BTC/USD) recent grind higher was given an extra push over the weekend after Tesla boss Elon Musk said that the electric car company would resume Bitcoin transactions ‘when there’s confirmation of reasonable (~50%) clean energy usage by miners with positive future trend’. In May, Musk said that he was halting Bitcoin transactions due to environmental concerns. The Tesla boss also said that the company had only sold around 10% of their Bitcoin holdings ($1.5 billion) to check market liquidity.

The news added extra impetus to the recent slow move higher in Bitcoin and the coin briefly threaten to break back above $40,000 before backing off to the early $39,000 area. We noted recently that any Bitcoin rally would run into a zone of resistance between $42k and $43.5k and this area remains the first target for BTC bulls.

The bullish hammer candle formation last Tuesday remains dominant, while BTC/USD is also back above the 20-day simple moving average for the first time in a month. The CCI indicator is showing the market as overbought for the first time since mid-April, so a further period of consolidation is likely needed before resistance comes under threat again.

Ethereum continues to underperform Bitcoin in the short-term and the spread broke below support at 650 over the weekend. The market set-up is still biased towards further BTC outperformance although traders should be aware that the market can change quickly, especially as Ethereum has been the market darling for most of this year. The May 22 and 24 prints at 600 and the May 23rd spike low at 558 should provide a reasonable support zone. 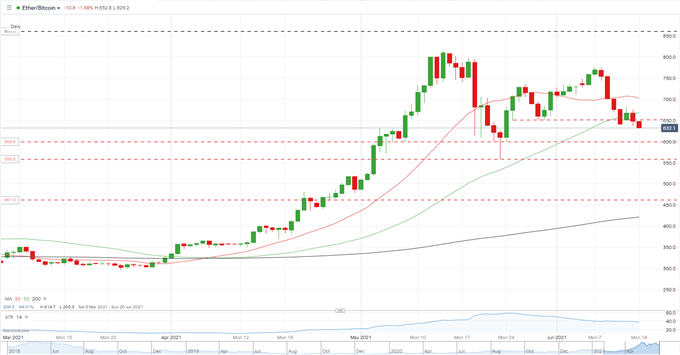 A to Z Crypto: Demystifying the Top Cryptocurrency Jargon

What are your views on Bitcoin (BTC) and Ethereum (ETH) – bullish or bearish?? You can let us know via the form at the end of this piece or you can contact the author via Twitter @nickcawley1.

How Canada’s Nextleaf Is Monetizing Its Patents