In this edition of Central Bank Watch, we’re examining the rates markets around the Bank of Canada, Reserve Bank of Australia, and Reserve Bank of New Zealand. Nearing the end of May, we have the RBNZ on the immediate event horizon, while both the RBA and BOC won’t be meeting again until early-June. After some tinkering in the recent past, it now appears that all three of the commodity currency central banks are on the straight and narrow path of keeping policy on hold for the foreseeable future.

The BOC meets next week for its June policy meeting the second week of the month, leaving a bit more time before CAD-crosses bring a more intense focus to the central bank. Having already tinkered with its QE program (so it doesn’t run into its self-imposed statutory limit), the BOC now appears that it will keep its main policy in place for the next several months. In fact, on Monday, BOC Governor Tiff Macklem expressed confidence in the decision to begin withdrawing stimulus, reaffirming the perception that the BOC has a somewhat hawkish bias relative to its other major peers. 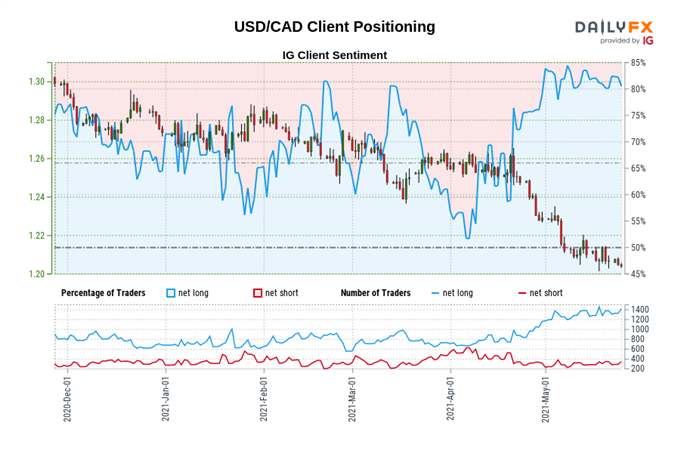 We typically take a contrarian view to crowd sentiment, and the fact traders are net-long suggests USD/CAD prices may continue to fall.

Traders are further net-long than yesterday and last week, and the combination of current sentiment and recent changes gives us a stronger USD/CAD-bearish contrarian trading bias.

Reserve Bank of Australia Succeeding in Pushing Back

The RBA appears to be diverging from its major counterparts, insofar as steps towards removing stimulus or tightening policy by the BOC (reducing QE) and the RBNZ (introduction of the housing remit) have been met by stronger efforts by the RBA to prevent long-end Australian bond yields from rising. The RBA has been fairly transparent, however, suggesting that they will keep stimulus efforts in place until headline Australian inflation returns to its +2-3% target band; in 1Q’21, it was a mere +1.1% (y/y) 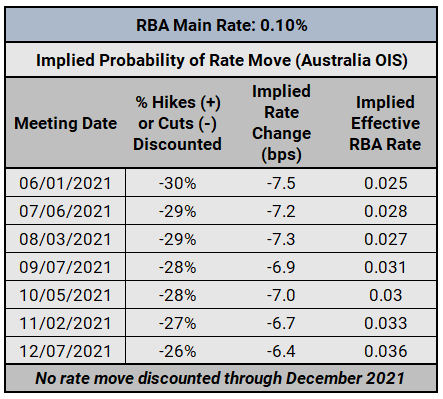 As noted previously, “market participants don’t seem convinced that the RBA will cave in on their yield curve control efforts to keep the main rate at its current level or lower through at least March 2023.” According to to Australia overnight index swaps, there is a 26% chance of a rate cut through December 2021, up from 17% the last time we checked. 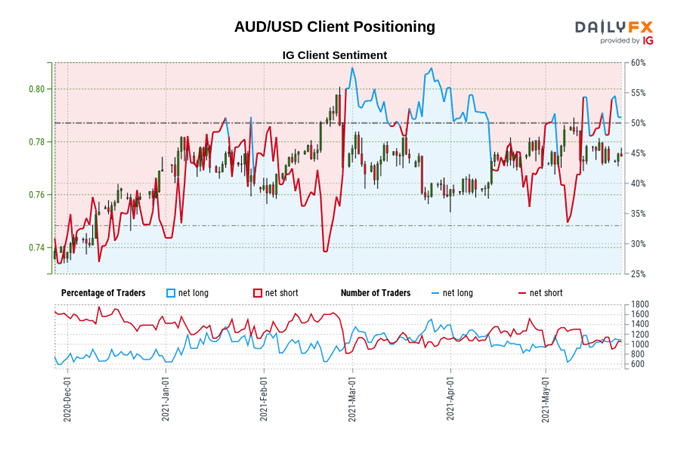 We typically take a contrarian view to crowd sentiment, and the fact traders are net-short suggests AUD/USD prices may continue to rise.

Positioning is more net-short than yesterday but less net-short from last week. The combination of current sentiment and recent changes gives us a further mixed AUD/USD trading bias.

The RBNZ will meet within 24-hours from now, but traders shouldn’t be anticipating much of anything to come from the meeting. While the housing market remains a source of concern for policymakers, the RBNZ appears unlikely to make any adjustments at present time (though the balance of risks is hawkish). Furthermore, given that new growth forecasts are due, more optimism may be perceived as a reason for Kiwi bulls to perk up. 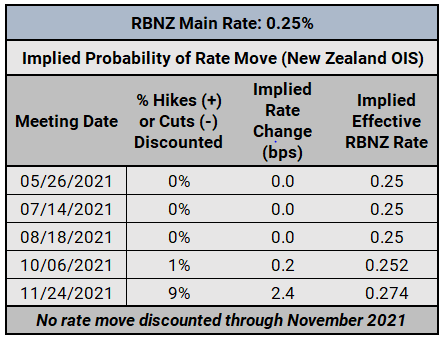 With house price growth forecasts moderating and the New Zealand economy steadily improving, the RBNZ is in a fairly comfortable position to sit tight. New Zealand overnight index swaps are now pricing in a 9% chance of a rate cut by mid-year, up from the 1% chance priced-in upon our prior review. The RBNZ may make overtures to signal removal of stimulus plans eventually, but not vis-à-vis the interest rate channel in the near-future. 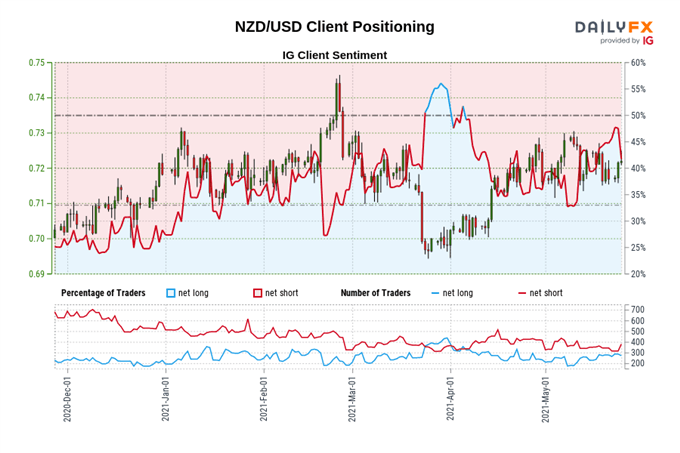 We typically take a contrarian view to crowd sentiment, and the fact traders are net-short suggests NZD/USD prices may continue to rise.

Traders are further net-short than yesterday and last week, and the combination of current sentiment and recent changes gives us a stronger NZD/USD-bullish contrarian trading bias.

Digital Transformation Is About Processes Not Products

How to Earn Interest with a Compounding Interest Investment Account