After a strong start to the week, crude oil prices stumbled after the Organization of the Petroleum Exporting Countries including Russia (OPEC+) failed to come to an agreement regarding output increases. This may result in member states taking matters into their own hands and raising output regardless of the OPEC+ accord. A case of rejection for current restrictions could mean further depreciation of crude prices going forward.

The UAE and Saudi Arabia are at loggerheads after Saudi Arabia declined the UAE’s requests to increase output as per the current agreement, meaning output will remain at current levels (see current supply below). Forecasted figures as highlighted below for Q3 2021 shows the massive spike in output from 30.90mbpd to 33.31mbpd which has not yet been put into action. Further clarity on U.S. crude inventories will be announced later today (10:30 ET) via the U.S. Energy Information Administration (EIA) Petroleum Status Report.

Logically, the continuation of restricted supply should see crude prices push higher but in this case market participants are hesitant because a potential breakdown between oil producers (and potentially OPEC) could be disastrous. Russia has entered discussions and is acting in a mediatory capacity between the two distressed nations in hopes of a resolution.

STRONG IRAQ OUTPUT MAY BE DISRUPTED BY ESCALATING TENSIONS WITH U.S. FORCES

Iraq has been incrementally increasing output in 2021 but after a higher frequency of bombings within the region between the U.S. and Iraqi militia, we could see a disruption in supply should the violence intensify.

Yesterday, Fed officials did not announce any substantially varied information but eluded to inflation being transitory as well as the need for greater economic recovery data before tapering. Many believe this could take place as soon as September this year while others anticipate restricted bond-buying in early 2022. This leaves the Federal Reserve in the ‘hawkish’ camp leaving the U.S. dollar open to further upside; supportive of lower crude oil prices. 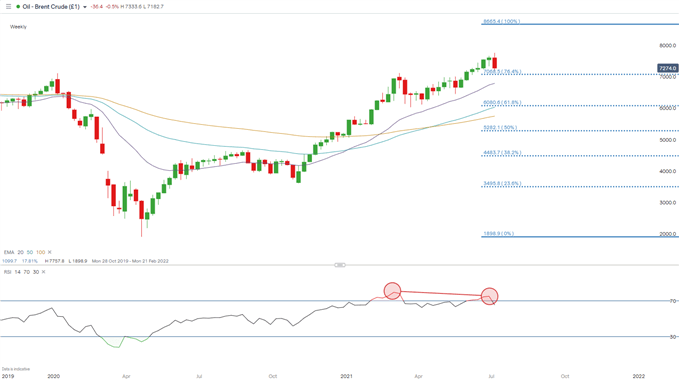 The weekly Brent crude chart above shows price action pushing higher while the Relative Strength Index (RSI) indicates slowing upside momentum (red). This is known as divergence but more specifically bearish divergence. Bearish divergence points to the potential drop in future prices which is presently developing. Fundamental influences will dictate the future of crude oil prices as to whether this is a start of a reversal or a push toward $80.00 per barrel. 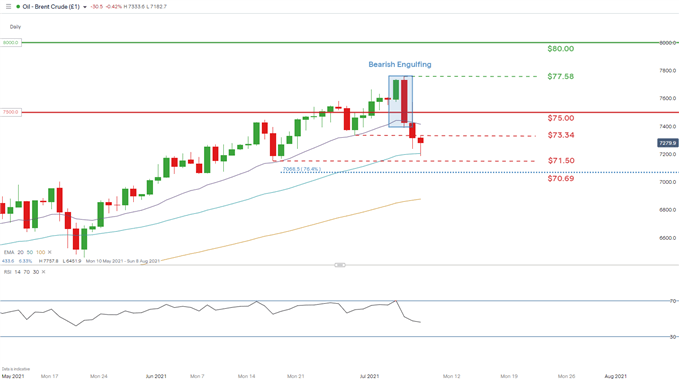 Tuesdays daily candle close revealed a bearish engulfing pattern which has since extended to the downside in a textbook fashion. This pattern traditionally appears at the top of an uptrend which is further supported by the overbought signal on the RSI. A confirmation candle close yesterday below the $75.00 per barrel psychological level has reaffirmed the potential for an extension to the downside.

The 50-EMA has held as a support zone today after bears were unable to sustain prices below this zone. The short-term directional bias remains bearish for now which brings into focus the $71.50 per barrel and subsequent 76.4% Fibonacci support levels.

Discover the basic building blocks of Fibonacci and how it can be applied in Financial markets!

The less likely bullish scenario will require strong fundamental backing as well as a key price break above the $75.00 per barrel resistance zone –while prices above $73.34 per barrel may not be enough to convince bulls that a bullish continuation may ensue.

IGCS shows retail traders are marginally net short on Crude Oil, with 51% of traders currently holding long positions (as of this writing). At DailyFX we typically take a contrarian view to crowd sentiment however, because the daily change in overnight interest is 0% the bias remains mixed which falls in line with the current crude oil fundamental backdrop.