The Australian Dollar made a new low for the year in the fourth quarter, stopping short of the November 2020 low of 0.6991. It appears that the impact of commodity prices and long-term interest rates on the currency took a back seat to short-term interest rates and the strength of the US Dollar.

Will commodities get AUD traders attention?

The price of iron ore was only slightly weaker through the fourth quarter after collapsing in the third. However, energy commodities surged into the end of the year.

The situation on the commodity front is best illustrated by the RBA commodity index. The index is weighted according to Australian exports, and it remains at elevated levels. The charts above from the RBA highlight the strong contribution from commodities to the trade balance.

It should be noted that the terms of trade are at cyclical highs. This is a significant boost to the Australian economy.

Despite the perception of a slowdown in China, commodity exports continue to improve the bottom line.

Looking at interest rate differentials, both the 1 and 10-year bond yield spreads of Australia over US peaked at about the same time that the AUD/USD hit the November high. As both spreads contracted, AUD/USD went lower. However, the 10-year spread appears to have had less of an impact than the 1 -year – as shown in the chart below.

This was also occurring at a time when the US Dollar was appreciating across the board.

Narrowing interest rate differentials and US Dollar strength came at a time when the Federal Reserve turned more hawkish. 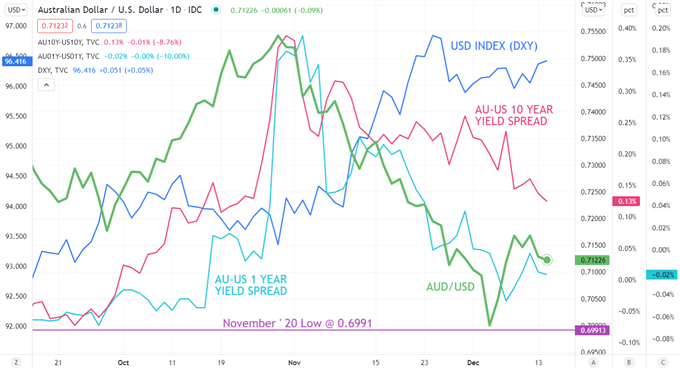 Looking into 2022, AUD/USD appears to be at the whim of Australia/US interest rate differentials and the US Dollar, while commodities seem to be out of the picture for now. It is the recent change in tack by the Federal Reserve that is driving rates and the demand for US Dollars.

The RBA has remained comparatively dovish at a time when central banks around the globe are looking to tighten monetary policy aggressively. A robust Australian economy could be the factor to tilt the RBA into action and unwind pandemic stimulus.

Headline CPI is at the cusp of the upper bound of their target range of 2 – 3%, while their preferred measure of trimmed mean inflation, is at the lower bound.

Their next meeting is early February, by that stage, officials will have fourth quarter CPI to take into account. With many Australian states re-opening in the fourth quarter, it is possible to see an up-tick in prices. This could force the RBA’s hand and some hawkishness might be seen. The Australian Dollar may continue to languish until the RBA changes its tune.

In this scenario, AUD/USD may soften into early 2022 while the Fed remains on track to tighten policy at a faster pace than the RBA. A strong CPI print could see the RBA jump into action in February and this might see AUD/USD appreciate.