Crude oil prices held steady during Wednesday’s APAC session after falling 4.7% over the last two days. A rapid Covid-19 flareup in China cast a shadow over its growth outlook amid an already slowing economy. Authorities have reported 353 locally transmitted cases since July 20, with the highly contagious Delta variant found in more half of China’s 32 provinces. Over 46 mainland cities have warned against non-essential travel and conducted mass-testing for the virus to curb its spread.

Stricter mobility constraints may dampen the energy demand for the world’s largest oil-importing country. China accounts for around 26% of the world’s total crude imports, with over 40 million barrels imported monthly so far in 2021 (chart below).

Technically, WTI entered a technical pullback after hitting a two-and-half year high of $76.95 on July 6th (chart below). Prices have since formed consecutive lower highs and lower lows, suggesting that near-term trend may have flipped downward. An immediate support level can be found at around $70.00 – a psychological level, and then $68.80 – the 78.6% Fibonacci extension. An immediate resistance level can be found at $73.26 – the 127.2% Fibonacci extension.

The MACD indicator is trending lower, suggesting downward momentum may be dominating. 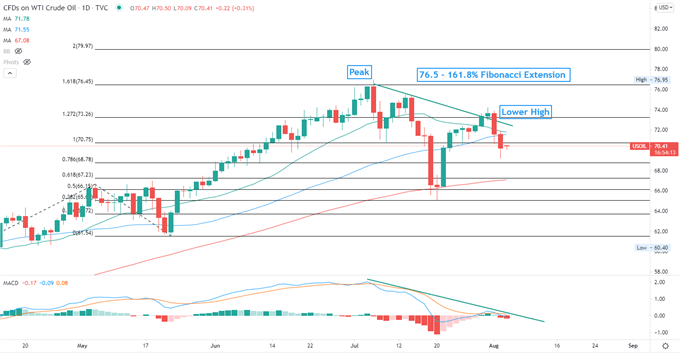