After the Federal Reserve’s hawkish slant earlier this week, the ECB will be in full view next week particularly around its inflationary stance. The divergence between the two major central banks are stark however money markets tend to be at loggerheads with ECB officials as reflected in the markets pricing in a 35bps rate hike by the end of the year (while ECB officials reiterate the unlikelihood of a rate hike by year end).

Inflation and GDP data is scheduled leading up to the ECB meet which may hamper hawkish pressure. Both prints are expected lower than prior figures although inflationary pressure may not be dismissed too quickly as the ongoing Russia/Ukraine tensions continue to weigh on European oil and gas prices. While there is no rate hike expected next week, clarity around the thought process of the ECB will be monitored closely via the press conference post-announcement. 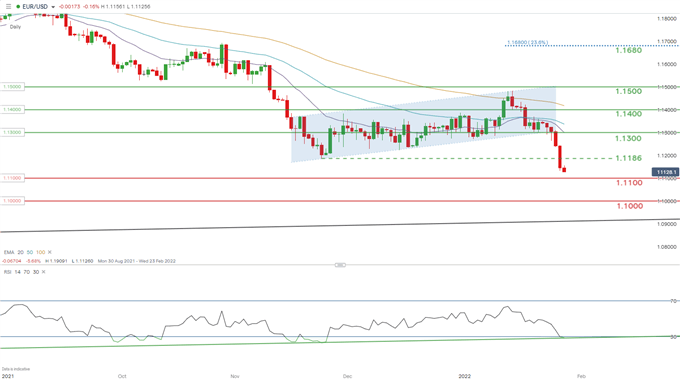 The Euro comes under heavy fire this week post-FOMC and broke the bear flag support zone (blue) after consolidating upwards since mid-November 2021. Swing lows were also taken out yesterday at 1.1186 leaving the 1.1100 psychological level in striking distance (last seen in May 2021).

The U.S. dollar continues its run in early trading this Friday leaving the EUR roughly 2% down YTD.

I think there is more room to run around the 1.1100 support zone and potentially 1.1000 but thereafter a reversal to the upside is likely.

IGCS shows retail traders are currently long on EUR/USD, with 69% of traders currently holding long positions (as of this writing). At DailyFX we typically take a contrarian view to crowd sentiment leaving a bearish disposition on the pair.