EUR/USD rallies to a fresh monthly high (1.1451) as the European Central Bank (ECB) adjusts the forward guidance for monetary policy, and the exchange rate may trade to fresh yearly highs as it appears to be on track to test the January high (1.1483).

EUR/USD extends the advance from the January low (1.1121) as the ECB plans to conclude thePandemic Emergency Purchase Programme (PEPP) at the end of March, and it seems as though the central bank will switch gears later this year as “inflation is likely to remain elevated for longer than previously expected.”

The hawkish tone suggests the ECB will lift the benchmark interest rate off of the record low in 2022 as the central bank pledges to “adjust all of our instruments, as appropriate, to ensure that inflation stabilises at its two per cent target over the medium term,” and the Governing Council may layout a more detailed exit strategy over the coming months as President Christine Lagarde vows to “take the right steps at the right time.”

As a result, speculation for a looming change in regime may shore up the Euro as President Lagarde acknowledges that the “situation has changed,” and it seems as though the ECB will continue to adjust the forward guidance in 2022 as the central bank is slated to publish fresh forecasts at its next meeting on March 10.

Until then, EUR/USD may stage a larger correction as it appears to be on track to test the January high (1.1483), and it remains to be seen if the US Non-Farm Payrolls (NFP) report will derail the recent advance in the exchange rate as the economy is anticipated to add 150K jobs in January.

However, another weaker-than-expected NFP report may keep EUR/USD afloat as it puts pressure on the Federal Reserve to delay normalizing monetary policy, and a further appreciation in the exchange rate may fuel the recent flip in retail sentiment like the behavior seen during the previous year. 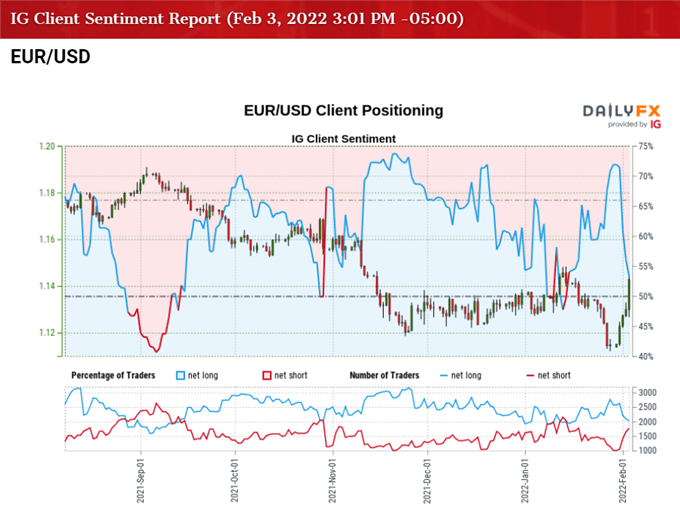 The IG Client Sentiment report shows 42.73% of traders are currently net-long EUR/USD with the ratio of traders short to long standing at 1.34 to 1.

With that said, it remains to be seen if the advance from the January low (1.1121) will turn out to be a correction in the broader trend as the Federal Open Market Committee (FOMC) looks to winddown its balance sheet in 2022, but the exchange rate may trade to fresh yearly highs as it appears to be on track to test the January high (1.1483). 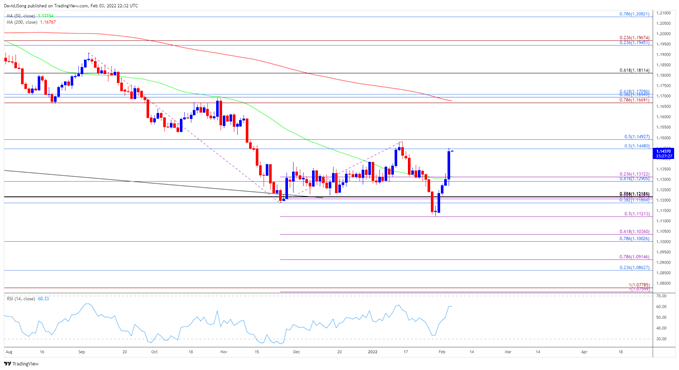 Five Reasons To Do Affiliate Campaigns In 2022