EUR/USD stages a four-day rally as European Central Bank (ECB) officials adopt a hawkish tone, but the update to the US Non-Farm Payrolls (NFP) report may undermine the recent recovery in the exchange rate as the Federal Reserve looks poised to switch gears later this year.

EUR/USD trades back above the 50-Day (1.1806) for the first time since June as ECB Vice-President Luis de Guindos anticipates the Euro Area recovery “to be fairly strong in the third and fourth quarters,” and the comments suggests the Governing Council will adjust the forward guidance over the coming months as the “European economy will be able to recover its pre-pandemic income levels by the end of this year or the beginning of next year.”

As a result, Vice-President Guindos insists that “if inflation and the economy recover, then there will logically be a gradual normalisation of monetary policy,” but went onto say that “the premature withdrawal of stimulus should be avoided” during an interview with El Confidencial.

It seems as though the ECB is in no rush to alter the path for monetary policy “given that the economic situation is still fragile,” and it remains to be seen if President Christine Lagarde and Co. will adjust the forward guidance at the next interest rate decision on September 9 as the central bank braces for a transitory rise in inflation.

Until then, data prints coming out of the US economy are likely to sway EUR/USD as the weaker-than-expected ADP Employment report sparks a bullish reaction in the exchange rate, with the update showing a 374K expansion in August versus forecasts for a 625K print.

In turn, the US Dollar may face headwinds ahead of the Non-Farm Payrolls (NFP) report as signs of a less robust recovery encourages the Federal Reserve to retain the current path for monetary policy, but a positive development may undermine the recent rebound in EUR/USD as it puts pressure on the Federal Open Market Committee (FOMC) to deploy an exit strategy sooner rather than later.

The diverging paths for monetary policy casts a bearish outlook for EUR/USD as it slipped to a fresh yearly low (1.1664) in August, but a larger recovery in the exchange rate may fuel the flip in retail sentiment like the behavior seen earlier this year. 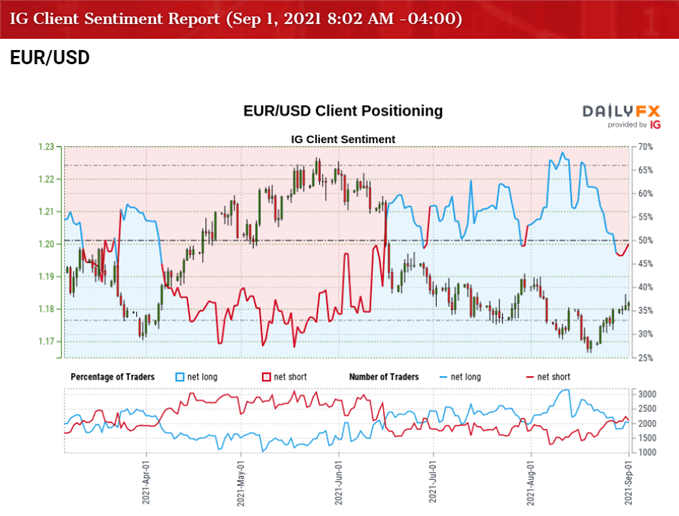 The IG Client Sentiment report shows 49.17% of traders are currently net-long EUR/USD, with the ratio of traders short to long standing at 1.03 to 1.

With that said, EUR/USD may stage a larger recovery in September if the NFP report dampens speculation for a looming shift in Fed policy, but the advance from the August low (1.1664) may turn out to be a correction in the broader trend as it fails to defend the range from the first-half of the year.