As we head into a new trading year, there are a number of major fundamental themes that seem to carry weight in directing larger financial trends. One of the top matters on my radar is the slow turn in global monetary policy trends. A number of the world’s largest central banks have already acted or announced intention to slowly pull back on their extremely accommodative stance following the pandemic-driven global recession. While groups like the Fed, Bank of England and Bank of Canada have signaled taper and rate hikes; one of the biggest players, the European Central Bank (ECB), has kept to its extremely dovish line. That has added to the weight on the Euro over the past few months, but the implications here will not move in a straight line. Forecasts will be priced in and motivation from other fundamental matters will arise. I take a look at three Euro crosses that look interesting in this fundamental context along with their unique present technical setups.

The Euro and British Pound have many fundamental similarities between them given the importance of their respective economies to each others’ health. The connection has been distorted somewhat since Brexit, but the tracking is still not so divergent between them. As far as interest rate differentials go, the Bank of England (BOE) hiked its benchmark interest rate two weeks ago to a 0.25 percent baseline. That is a clear hawkish contrast to the ECB’s persistent hold at 0.00 percent. That said, the tightening was anticipated – and was even unfulfilled at the previous policy meeting the month before. Looking to the short-term government bond yield differentials between Germany and the UK, the spread has been all but flat these past weeks. That makes EURGBP’s 8 consecutive day slide into a low that stretches back 20 months all the more remarkable. While I would like to see a turn on the chart, a steadfast rate perspective could contribute to a productive reversal.

Chart of EURGBP with 200-Day SMA and Consecutive Candle (Daily) 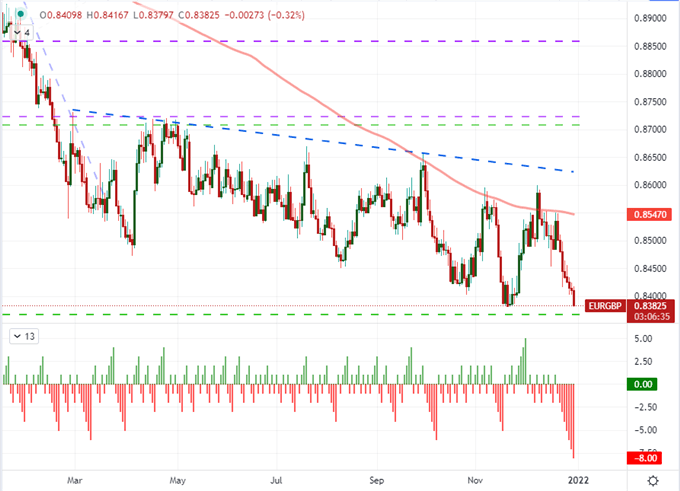 In contrast to the British Pound, the Swiss Franc is backed by arguably the most dovish major central bank for current policy. The Swiss National Bank (SNB) has maintained a negative -0.75 percent benchmark for six years. This unusual policy stance was the result of a failed effort to maintain a floor for EURCHF. Since that extreme disruptive fallout, the exchange rate only briefly returned to that 1.20 level back in the second quarter of 2018. Markets have been trading meaningfully off those highs since and we have recently returned to lows not seen since August 2015. There was an unconfirmed believe in the market until November that the SNB was actively acting to keep the exchange rate above 1.0500, but the slide since that floor gave cut the belief that they were attempting – or worse that they were even capable of the feat. There are serious negative economic and financial complications that come with this exchange rate dive for Switzerland. They may struggle to permanently turn the trend, but the market would certainly be very sensitive to an initial correction which would lead to speculation that the central bank is attempting to intervene. 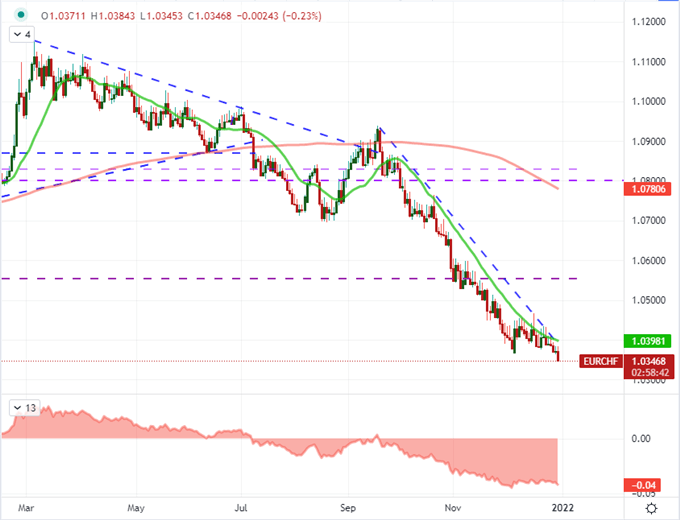 The third Euro cross that of interest to me on a monetary policy and technical basis is EURNZD. Here, the fundamental disparity is not difficult to miss as New Zealand rates are far more robust than those in Europe (below I use German) yields. That said, there isn’t a straight line trend to be found in the exchange rate as if carry trade is the only matter urging drive. Here too, interest rates and interest rate forecasts are well priced with the hikes from the RBNZ generating remarkably little traction here. A recent pullback in the New Zealand 10-year yield relative to its German counterpart is still drifting against the former, but rate forecasts are not likely to flip trend so significantly. Where I see Euro bullish potential in the former two pairs, this one seems technically primed for the opposite with a break below 1.6500 a viable cue should it arise. This would also be more of a ‘range’ move rather than full-tilt reversal which makes for more practical strategy configurations. 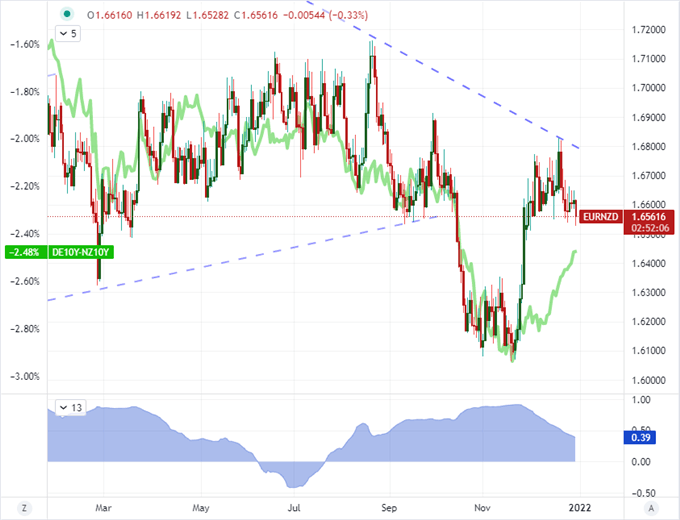 Five Types Of Digital Apps Every Entrepreneur Should Be Using