Euro Holds Up vs. US Dollar Despite Market Mayhem Before Fed Meeting

Grappling with a rapid pickup in inflation and speculating on the likely response to it by global central banks have defined the dominant narrative for financial markets since at least mid-2021. That’s when the Federal Reserve began to signal that the time had come to begin scaling back Covid-triggered stimulus.

The start of 2022 brought a key turning point. The Fed’s hawkish rhetoric began to truly sink in for investors as it threatened to start ‘quantitative tightening’ – reducing the balance sheet to boost long-term interest rates – alongside interest rate hikes this year.

Markets got the message: inflation expectations cooled while nominal interest rates pushed higher, implying confidence in the Fed’s conviction. That pulled real interest rates sharply higher. The benchmark 10-year TIPS rate is on pace to finish January with the biggest monthly rise in over two years.

Rising inflation-adjusted returns on relatively safer assets have encouraged a rebalancing of portfolios. Ultra-low rates had pushed investors to riskier bets in search of returns. Now in reverse, the same dynamic has pulled down stocks, a bellwether asset class for market-wide risk appetite.

One might have expected that the US Dollar would be a star performer against such a backdrop, benefitting from yield support courtesy of the hawkish Fed. The currency is up on the month against an average of its major counterparts, but only modestly.

In a telling breakdown, the Euro has managed impressive resilience while the New Zealand Dollar has suffered outsized losses. This appears to reflect a larger theme: since the start of the year, the Greenback’s rise against ‘pro-risk’ currencies has been more than double the gains versus ‘anti-risk’ alternatives.

Put another way, USD has scored outsized gains against currencies sensitive to the global business cycle and market sentiment (AUD, NZD, CAD). Defensively-minded currencies (EUR, CHF, JPY) have held up markedly better, though the shift in Fed views has allowed the Greenback a modest overall advance.

This is despite the former group looking set to match the four interest rate hikes now expected of the Fed in 2022. Meanwhile, the latter set is seen sustaining negative-interest-rate policies at least until next year. This preference for relative ‘safety’ over returns underscores the markets’ risk-off disposition. 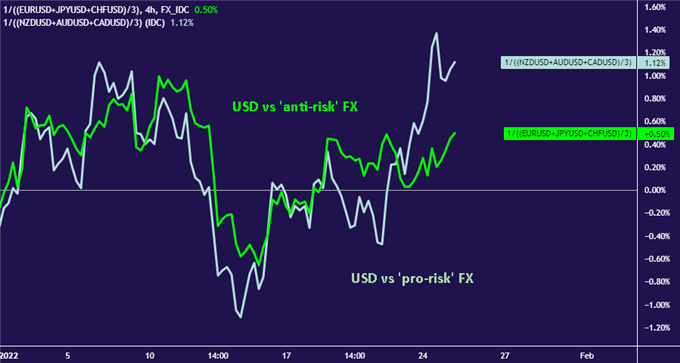 With that in mind, this week’s much-anticipated monetary policy announcement from the Fed’s rate-setting FOMC committee may bring a somewhat novel response from the markets. Policymakers are firmly expected to hold firm this time ahead of a well-telegraphed hike in March.

Meanwhile, a repeat of Fed officials’ already combative language from the recent weeks in the policy statement and Chair Powell’s press conference seems unlikely to move expectations much further. That might offer a brief bit of relief for markets, if only in that the risk of surprise escalation will have been neutralized.

Interestingly, this might weigh on EUR/USD. If the Euro is indeed being held up by anti-risk flows, support may be undermined if risk appetite steadies after the Fed has said its piece. That would perhaps allow the Greenback’s advantage against the single currency on the relative yield front to shine anew.

Euro chart positioning is little-changed from last week’s setup. Prices are idling between resistance in a congestion area capped at 1.1378 and a rising trend line guiding the shallow rebound from last week’s lows. A daily close below this barrier would speak to downtrend resumption, exposing support below the 1.12 figure.

Alternatively, reclaiming a foothold above 1.1378 may set the stage for another run at resistance clustered around the 1.15 mark. Making the case for upside follow-through probably demands still-greater conviction however, calling for a return north of 1.17. 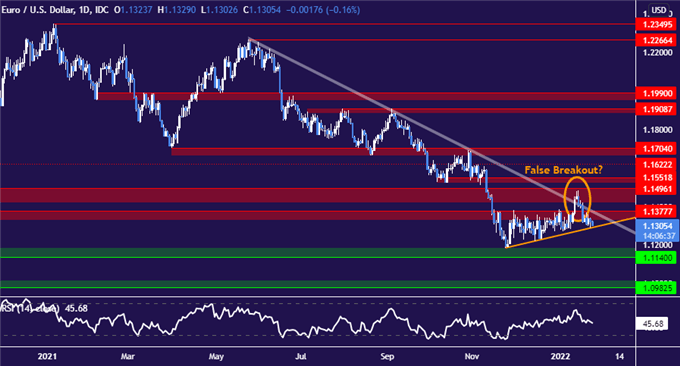