The Euro has gone lower against the US Dollar in Asia today as the consequences of runaway inflation ricochets through markets.

Headline US CPI shocked the markets, coming in at an annual rate of 7.5%, 0.3 percentage points higher than anticipated. The market is now pricing in 7 rate hikes this year, up from 5 before the figure.

Federal Reserve Bank of St. Louis President James Bullard threw some gas on the fire by stating that the Fed should hike by 100 basis points at the next three meetings. He also raised the possibility of a move in rates between meetings. Speculation is rife of a 50-basis point lift by the Fed in March.

As a result, US Treasury yields roared higher across the curve, most notably in the short end. The 2-year note hit 1.64%, from around 1.35% prior. Government bond yields around the world have lifted to varying degrees in the aftermath.

The blast higher in US yields, particularly real ones, saw the gold price sink. It’s trading near US$ 1,824 per ounce today, down from yesterday’s high of US$ 1,841.

Crude oil remains steady while all currencies are weaker against the US Dollar in the Asian session.

USDJPY punched above 116, trading near its 4-year high seen last month. AUD, NOK and NZD are the largest under performers for the session. EUR is down around 0.4% at 1.1380 against USD.

Wall Street finished their day lower, and futures markets are pricing a negative start to their cash session ahead. Japan was on holiday, Hong Kong and Chinese markets are slightly up, while the rest of APAC are in the red today.

Today the market will be dissecting UK GDP, trade, industrial production and manufacturing production figures as well as European CPI.

The US will see University of Michigan consumer sentiment data. 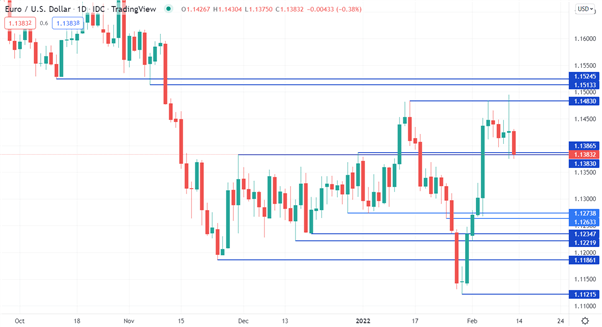