Get Your Free EUR Forecast

US Dollar weakness on Thursday saw EURUSD push back to the 0.9800 area as bulls were able to build on Wednesday’s impressive rally. While the Euro still remains challenged fundamentally, the beaten down currency may be benefitting from significant month-end flows as traders round out a tumultuous quarter. Headlines continue to swirl surrounding the damage to the Nord Stream pipeline, as the sabotage theory continues to gain steam.

Earlier this morning, German inflation data reached double digits after jumping 10% on a YoY basis. The September reading was up from a 7.9% print in August, indicating the heartbeat of the European Union may remain some ways away from peak inflation. Energy and food prices continue to soar in Germany, rising 43.9% and 18.7% YoY respectively.

While these data points are just preliminary readings, they will certainly be ringing alarm bells at the ECB. Following the release of the data, traders rushed to price in a higher terminal rate for the European Central Bank. These higher inflation prints may only benefit the Euro in the short-term, as focus will soon shift to the slowdown in growth across the continent as a result of restrictive monetary policy and war.

As mentioned earlier, the EURUSD rate has soared over the last few days as we draw the curtains on a historic quarter. During Wednesday’s robust melt higher for risk assets, EURUSD put in a 2.25% intraday move after breaking out of a falling wedge formation. Following a brief pullback overnight, EURUSD has had another monster session today with a trading range of nearly 170 pips. Volatility may last into Friday’s session as traders prepare for a crucial PCE report. Will the report reflect the August CPI surprise from September 13th? Or will the Federal Reserve’s preferred measure of inflation offer a downside surprise? 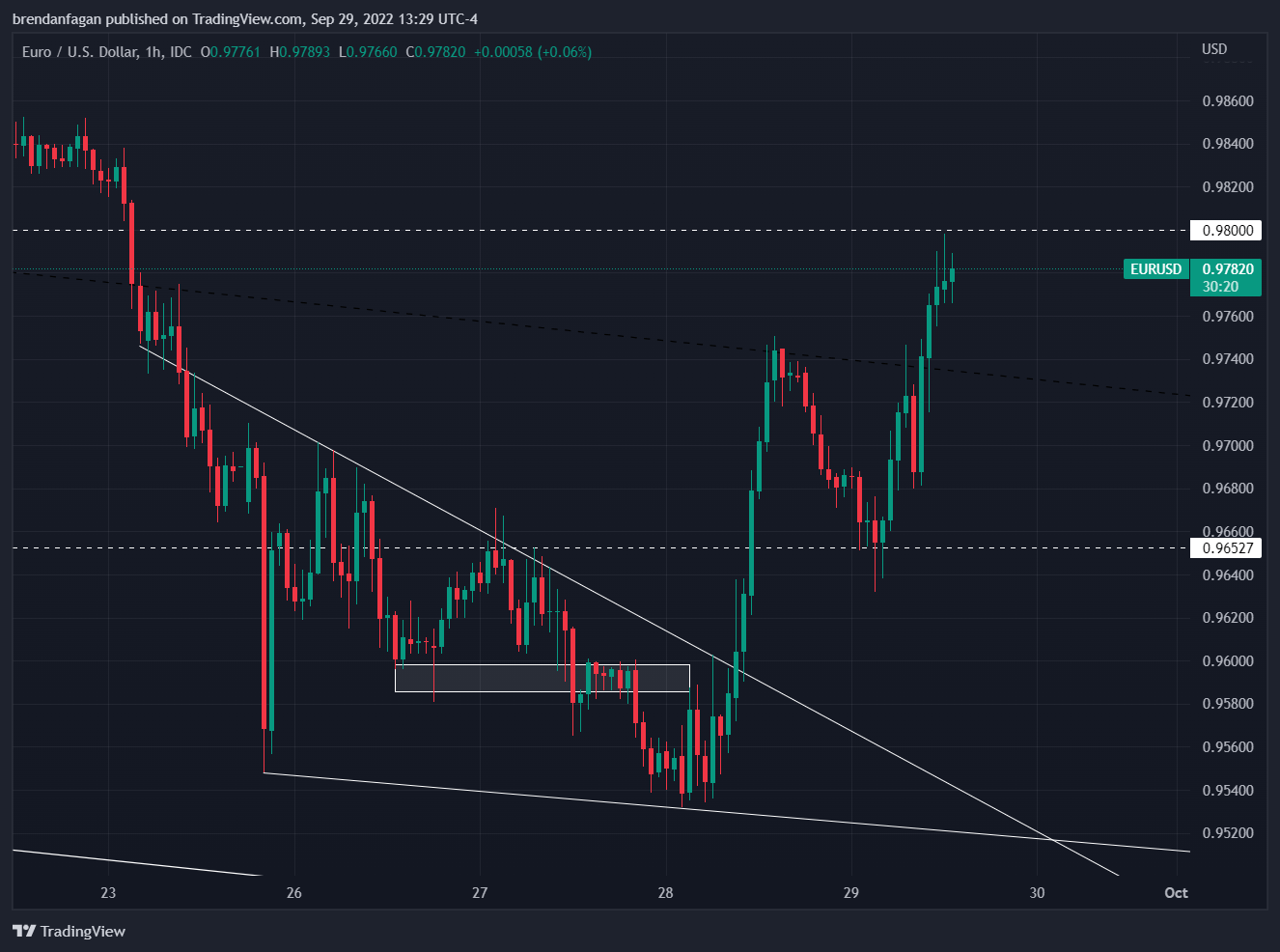 With the wedge formation having offered a robust move higher, EURUSD has come to test the key 0.9800 level that was able to stem the bleeding following the September 21st FOMC meeting. Having been such a key area of support previously, bulls may have a difficult time making a material break through this new resistance area. Upside momentum may also be limited as traders may want to remain flat or limit exposure into tomorrow’s PCE print. If there is a continuation to the upside over the next few sessions, bulls will likely look to revisit the areas surrounding both 0.9900 and 0.9960 before ultimately attempting to mount an attack on parity. On any serious pullback, I would look to the 0.9652 pivot zone for initial support.

Receive timely and compelling market commentary from the DailyFX team

Whether you are a new or experienced trader, we have several resources available to help you; indicator for trackingtrader sentiment, quarterlytrading forecasts, analytical and educationalwebinarsheld daily,trading guidesto help you improve trading performance, and one specifically for those who arenew to forex.

Four Tips On Perseverance When Times Are Tough

Euro Fights Back Against a Tumultuous US Dollar...

S&P, Nasdaq, Dow Jones Tighten Ahead of a...

A Sinking US Dollar Floats All Boats