The Hang Seng Index remains firmly in the spotlight as the Evergrande drama continues to unfold. The index fell by more than 2% on Monday as fears continue to grow surrounding Evergrande’s dollar bond payments. Shares of the distressed developer were abruptly halted in Hong Kong along with all related structured products, “pending an announcement related to a merger or takeover.” Initial reports out of Hong Kong state that Hopson Development Holdings is looking to acquire a majority share in Evergrande Property Services Group. Worries over slowing growth in China were amplified last week, as industrial profit and manufacturing PMI data was worse than expected for August and September respectively.

The Hang Seng Index’s decline brings key levels into play, the first being major trendline support. Despite being breached on multiple occasions in July and August, the descending trendline has offered a broad level of support. Monday’s decline sees the index testing support, and a break lower could see support in the form of the 0.236 Fibonacci level come into play around 23,500. Given the grim fundamental construct surrounding the index, price may continue to search for a near-term bottom as the Evergrande situation looks for a resolution. Away from Evergrande, continued scrutiny from Beijing toward gaming and tech companies continues to weigh on market sentiment. Shares of Tencent and Alibaba Group have declined for consecutive weeks, sending the Hang Seng Tech Index within touching distance of its record low. Market participants remain fearful as Beijing announced last week that it is looking into additional oversight over internet companies. 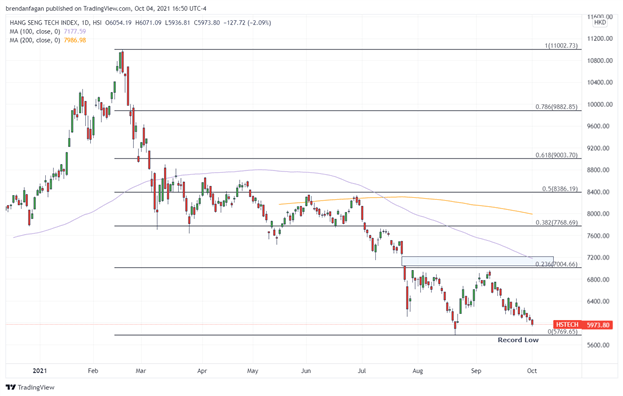 US-China trade relations have also returned to the forefront, as Washington actively reevaluates the American supply chain in the wake of recent bottlenecks. In a speech given on Monday, U.S. Trade Representative stated that Washington will be enforcing “phase one” of a trade deal signed in January 2020. Tai also made China aware that tariffs were remaining in place, which may reignite tensions between Beijing and Washington. According to prepared remarks, the Biden Administration has serious concerns over “state-centered and non-market trade practices” emanating out of China.

What is Forex? FX Trading Explained