In this edition of Central Bank Watch, we’ll review the speeches made over the past week-plus by various Federal Reserve policymakers in the run-up to the Jackson Hole Economic Policy Symposium, set to take place over the next few days.

A slew of hot labor market reports and inflation rate readings have set the stage for a more hawkish Federal Reserve in the coming months. FOMC policymakers seem to concur, insofar as the tone of commentary over the past week-plus has been catering to the market’s need to be given clear guidance well in advance of any forthcoming policy changes.

August 12 – Daly (San Francisco president) said that the FOMC could begin scaling back its stimulus withdrawal by the end of 2021.

August 15 – Kashkari (Minneapolis president) commented “if we see a few more jobs reports like the one we just got, then I would feel comfortable saying yeah, we are — maybe haven’t completely filled the hole that we’ve been in — but we’ve made a lot of progress, and now, then will be the time to start tapering our asset purchases.”

August 16 – Rosengren (Boston president) suggested “if we get another strong labor market report, I think I would be supportive of announcing in September that we are ready to start the taper program.”

August 18 – July FOMC minutes are released, which noted “various participants commented that economic and financial conditions would likely warrant a reduction in coming months,” as well as “several others indicated, however, that a reduction in the pace of asset purchases was more likely to become appropriate early next year.”

August 20 – Kaplan (Dallas president) issued caution, warning that his view on favoring tapering sooner rather than later could be adjusted if the delta variant concerns continued.

August 25 – George (Kansas City president) said in regards to delta variant concerns, “I don’t think it changes my own calculus that it is time to begin to make those adjustments given the gains we have seen so far.”

All Eyes (and Ears) on Fed Chair Powell

As expectations take shape for the Federal Reserve’s Jackson Hole Economic Policy Symposium, a ‘tell’ as emerged: the event has shifted from in-person to a virtual. And while Fed Chair Jerome Powell’s speech at Jackson Hole is vaguely titled “The Economic Outlook,” set to take place on Friday, August 27 at 10 EDT/14 GMT, the fact that the Fed has shifted the format to a virtual event signals they are concerned about the delta variant, a clue that they may wait a bit longer before a formal taper announcement is announced.

We can measure whether a Fed rate hike is being priced-in using Eurodollar contracts by examining the difference in borrowing costs for commercial banks over a specific time horizon in the future. Chart 1 below showcases the difference in borrowing costs – the spread – for the September 2021 and December 2023 contracts, in order to gauge where interest rates are headed in the interim period between September 2021 and December 2023.

By comparing Fed rate hike odds with the US Treasury 2s5s10s butterfly, we can gauge whether or not the bond market is acting in a manner consistent with what occurred in 2013/2014 when the Fed signaled its intention to taper its QE program. The 2s5s10s butterfly measures non-parallel shifts in the US yield curve, and if history is accurate, this means that intermediate rates should rise faster than short-end or long-end rates.

Whereas Fed rate hike odds have been largely unchanged since the release of the July FOMC minutes – which clearly stated there’s a difference between tapering and tightening –the US yield curve is moving in a manner that suggests a relatively more hawkish Fed is on the horizon (but not necessarily this week).

There are 94-bps of rate hikes discounted through the end of 2023 – that’s three hikes plus a 76% chance of a fourth 25-bps rate hike – and the 2s5s10s butterfly has increased to its highest rate since the Fed taper talk began in June. However, consistent with recent chatter from FOMC officials, the first rate hike looks increasingly likely to arrive in late-2022. 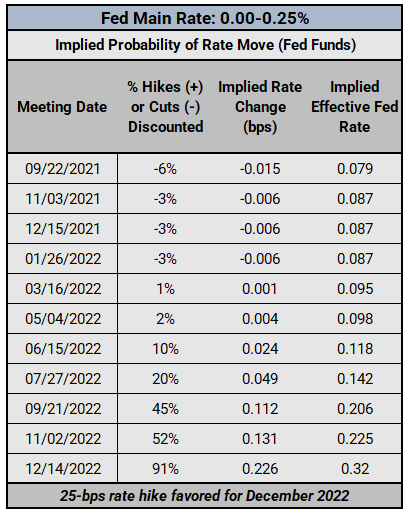 Recall that ahead of July FOMC meeting, December 2022 was the favored month for the first rate move, clocking in with a 68% chance. However, even as it appears that Fed Chair Powell won’t make a taper announcement at the Jackson Hole Economic Policy Symposium, traders are optimistic that the US economy will continue to progress, thereby allowing the Fed to announce their taper intention soon, perhaps as early as the September FOMC meeting. Accordingly, rates markets are now discounting a 92% chance of a the first rate hike arriving in December 2022. 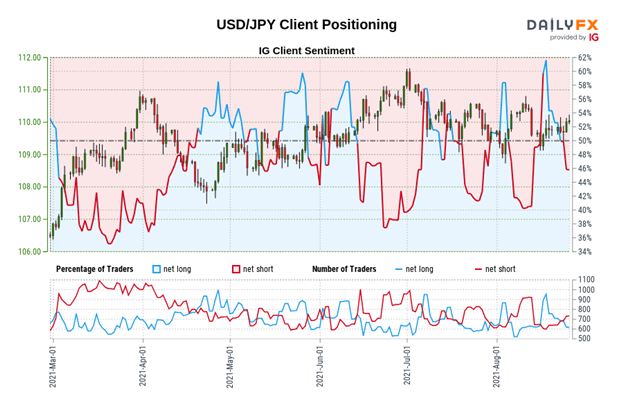 We typically take a contrarian view to crowd sentiment, and the fact traders are net-short suggests USD/JPY prices may continue to rise.

Traders are further net-short than yesterday and last week, and the combination of current sentiment and recent changes gives us a stronger USD/JPY-bullish contrarian trading bias.

What is it & Why Should Traders Care?