Friday’s US Inflation Data to Determine Next Move

The US Dollar Index, which measures USD against a basket of other currencies, can be expected to trade narrowly this session but traders need to keep a close eye on Friday’s core PCE data, which will likely determine its next major move.

As the US economy recovers from the downturn caused by the Covid-19 pandemic, inflation has taken over as the markets’ principal focus as everyone, from the Federal Reserve to traders, tries to decide whether it will be transitory – as expected by most central bankers – or long-lasting, requiring interest rates to increase faster than currently expected.

Indeed the PCE numbers, often described as the Fed’s favorite measure of inflation, are now arguably the most important data of the month; more important even than non-farm payrolls. Here’s what’s expected Friday:

Source: DailyFX calendar (You can click on it for a larger image)

The release will come in the wake of last week’s hawkish surprise from the Federal Reserve, which brought forward market expectations for the first increase in US interest rates to December 2022. However, since then, comments from Fed officials have been contradictory and expectations have been pushed out to February 2023. Several more Fed speakers are scheduled for this session, including the Fed Presidents from Philadelphia and Atlanta, who participate in a virtual panel discussion. Trading USD on what they say though would be unwise ahead of the PCE release as the index will likely stay close to the 92.0 level until then. 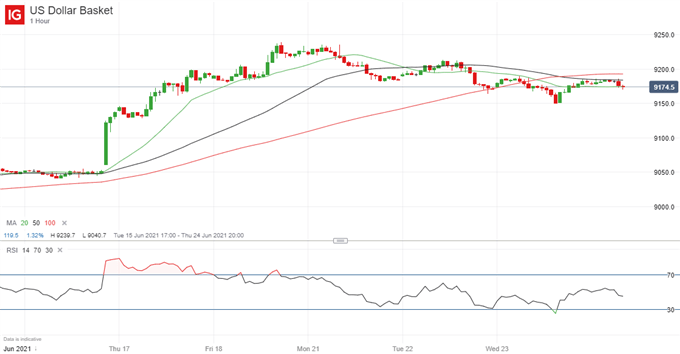 Source: IG (You can click on it for a larger image)