Bank of England Analysis and News

Bank of England left policy measures unchanged as expected with the Bank Rate remaining at 0.1% and gilt purchases at GBP 875bln. However, the vote split on gilt purchases saw Ramsden joining Saunders in calling for a cut to GBP 860bln. Alongside this, the BoE noted that some developments have meant that the case for tightening has strengthen, which in turn has prompted a shift in money markets pricing in a 15bps rate hike for March 2022 vs Previous May 2022. That said, the March meeting is not a quaterly meeting like February or May, making it unlikely that a hike will take place at March.

Growth: Bank staff had revised down their expectations for 2021 Q3 GDP growth from 2.9% at the time of the August Report to 2.1%, in part reflecting the emergence of some supply constraints on output. That would leave the level of Q3 GDP around 2½% below its pre-Covid level.

Inflation: The BoE also continue to expect inflation to rise towards 4% in Q4 before returning back to 2% over the medium term and thus sticking with the transitory view on inflation.

GBP/USD: A jump to session highs and breaking above 1.3700 in response to a slightly more hawkish than expected statement. On the topside, near term resistance sits at 1.3722 and 1.3750.

EUR/GBP: Range trading pesists in the cross, having once again failed to maintain a foothold above 0.8600 and thus remains the area to fade rallies into. That said, support is situated at 0.8520 and 0.8500. For now, there is little to suggest that this range will see a notable breakout. Short term momentum is neutral, offering little excitement for the cross. 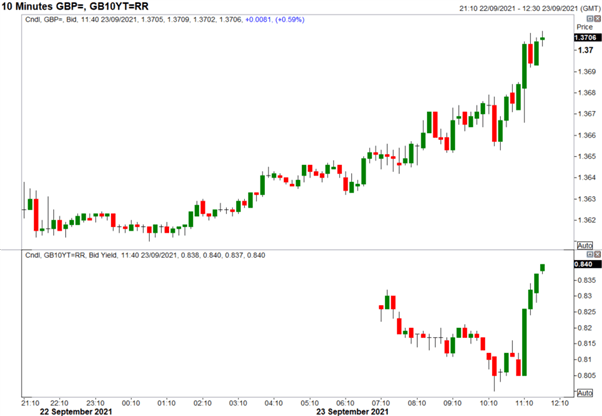 Fed Chair Powell Updates Progress of Digital Dollar, Says ‘I Don’t Think We Are Behind’ on CBDC – Regulation Bitcoin News