Stronger-than-expected US retail sales data was likely the key culprit, rising 0.7% m/m in August versus -0.7% anticipated. Excluding automotive and gas sales, transactions increased 2.0% versus 0.0% anticipated. The data likely continued fueling the Fed tapering timeline debate after mixed US jobs and CPI data. This comes ahead of next week’s FOMC monetary policy announcement.

Over the remaining 24 hours, gold traders ought to keep an eye out for University of Michigan Sentiment data. Preliminary estimates for September point to a 72.0 outcome, which would be higher than the 70.3 result in August. Another rosy print could further push of bond yields and the US Dollar, placing the yellow metal at risk. Likewise, a softer result may offer some cushion to XAU/USD.

Check out the DailyFX Economic Calendar for more key events!

Gold continues to trade lower in the aftermath of breaking under a bearish Rising Wedge chart formation. On the 4-hour chart below, the 50-period Simple Moving Average crossed under the 100 equivalent. That created a bearish ‘Death Cross’, underscoring the technical bias to the downside. Key support seems to be 1740, which is the August 12th low. In the event of a turn higher, the 1769 inflection point may act as resistance.

According to IG Client Sentiment (IGCS), about 85% of retail investors are net-long gold. Upside exposure increased by 16.25% and 13.77% over a daily and weekly basis respectively. We typically take a contrarian view to crowd sentiment. Since most traders are net-long, it suggests prices may continue falling. Recent changes in positioning are further underscoring a bearish contrarian trading bias. 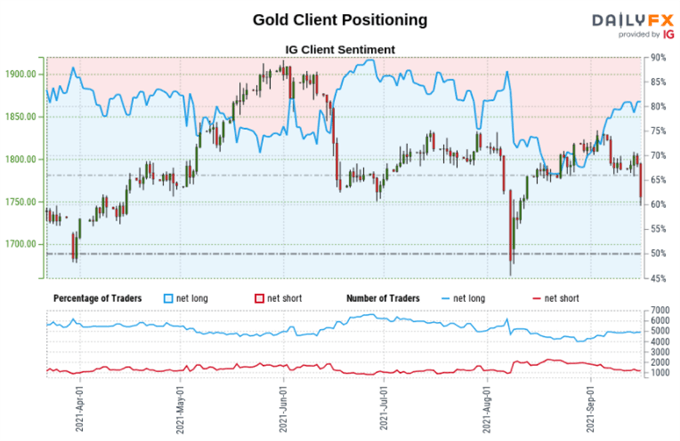