Gold prices closed above a 3-week high on Thursday. The anti-fiat yellow metal continued to gain ground in the aftermath of this week’s Federal Reserve monetary policy announcement. There, the central bank doubled the pace of tapering asset purchases, opening the door to finishing the process in early 2022. Meanwhile, policymakers hinted at three potential rate hikes next year.

It seemed though that the markets got ahead of the curve, with the S&P 500 rallying on Wednesday. This, however, reversed course Thursday. The Nasdaq 100 dropped about 2.6%, the worst day since late September. At first glance, it would seem that gold took on a ‘safe haven’ role over the past 24 hours, but a closer look reveals a different picture.

Gold tends to move more aggressively when both the US Dollar and Treasury yields aim in the same direction, whether it is up or down. On Thursday, both the US Dollar and Treasury rates softened, offering XAU/USD a kick. Still, the road ahead for gold remains challenging. Looming interest rate hikes from the US will likely be a key roadblock to the yellow metal. For now, the focus seems to be on risk appetite.

Gold has confirmed a breakout above the 100-period Simple Moving Average on the 4-hour chart below. That has opened the door to extending gains, which it has. Prices are nearing the 1808 – 1815 resistance zone. Clearing this range subsequently places the focus on the 1825 – 1833 inflection zone. Immediate support seems to be the prior December high at 1793.

According to IG Client Sentiment (IGCS), about 79% of retail traders are net-long gold. Since the majority of investors are long, this suggests prices may fall. However, downside exposure has climbed by 24.05% and 15.72% over a daily and weekly basis respectively. The combination of overall and recent changes in positioning is offering a bullish contrarian trading bias. 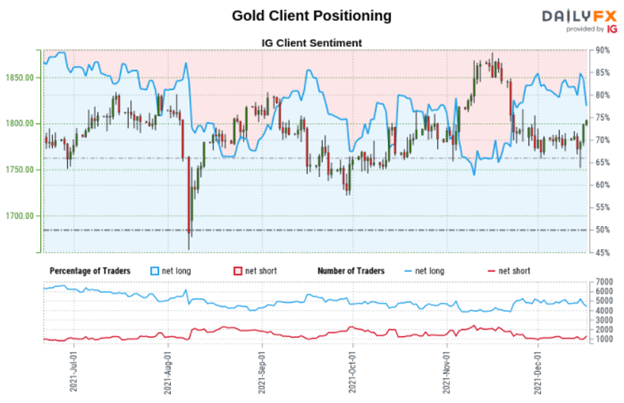 Meet The Stars Of Our Final Installment