Home Forex and Stocks Hang Seng Index Higher as Risk Turns On But AUD/USD Can’t Catch A Bid. Where To From Here?

Hang Seng Index Higher as Risk Turns On But AUD/USD Can’t Catch A Bid. Where To From Here?

Asian equities defied the US lead and moved higher on optimistic news that US President Biden and China President Xi Jinping had talked on the phone for 90 minutes. White House officials and Chinese state media both reported that the talks were essentially a good start, but nothing had been agreed to. They both expressed a desire to have ongoing talks to air grievances and find common ground. They last spoke in February.

Hong Kong’s Hang Seng Index (HSI) andJapan’s Nikkei 225 both had stand-out sessions as risk assets generally moved higher. Chinese tech stocks also had a strong day after local regulators provided some clarity around rule changes for gaming companies. They were not as severe as anticipated.

AUD/JPY and NZD/JPY, considered risk appetite bellwethers, found firmer footing as sentiment improved throughout the day. The move only retraced yesterdays losses and further positive news will be needed to lift both crosses above recent highs. AUD/USD was unable to get traction as there are two large option expiries today at 0.7350 and 0.7400 that kept the currency trapped in the range.

Crude oil slipped lower in the US but had a positive day in Asia as supply constraints outweighed China’s announcement of strategic reserve sales. The impact of hurricane Ida on offshore facilities may be worse than anticipated and could potentially reduce overall output. The higher oil price helped EUR/NOK slide lower.

Looking ahead, there is Canadian jobs data and US PPI due out later today.

AUD/USD has pulled back from recent highs and has consolidated going into the end of the week. On the topside there is potential trend line resistance at 0.7460, and then a possible barrier at the recent high of 0.7478. 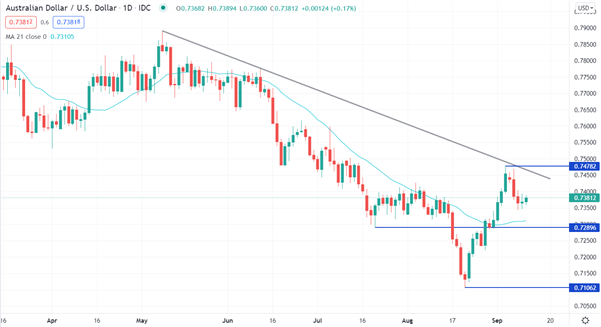