How Will the Pound (GBP) React?

Overview: The Bank of England is expected to maintain policy settings with the bank rate left at 0.1% and APF at GBP 895bln. Regarding asset purchases, it is likely that the BoE’s Chief Economist, Andy Haldane, will dissent again, voting in favour of a GBP 50bln reduction in QE. However, given that this is his last meeting, his vote is likely to be dismissed by market participants and instead, more attention will be placed on whether other members dissent. Reminder, this meeting is not a quarterly MPR and therefore tends to be seen as more of a stock-taking exercise. That being said, following the Fed’s hawkish surprise, there is a sense that expectations are rising for a slightly more hawkish BoE.

UK Economy: Developments since the May meeting have been encouraging with UK growth receiving a boost from the re-opening of the economy. The most recent monthly GDP figure beat expectations to rise at its quickest pace since last summer at 2.3%. This will likely see the BoE reiterate its view that growth is expected to reach pre-pandemic levels over the remainder of this year. UK CPI rose to 2.1%, breaching above the BoE’s target and somewhat quicker than the MPC had expected, where they saw inflation close to target in the near term and rising temporarily above the 2% target towards the end of the year, peaking at 2.5% in Q4. Alongside this, with survey data (PMIs) pointing to further strengthening in inflation pressures, much like the Fed, the BoE may also see higher inflation as more sticky than previously assumed in the short run. Elsewhere, the labour market has continued to recover with the unemployment rate dropping to 4.7% from 4.9% since the last meeting, while wage growth has seen a notable pick up, which further increases upside risks to the inflation outlook.

BoE Commentary: Perhaps the most noteworthy commentary from the BoE had been from Vlieghe who is the first on the MPC to talk about rate hikes in 2022. While Vlieghe is leaving the BoE (after the August meeting), the fact that he is typically on the more dovish spectrum and is now pointing to scenarios where a rate hike in 2022 could be appropriate is important, as this gives a sense of where the more moderate core MPC members stance lies. Overall, messaging from the BoE appears to be more on the hawkish side.

MPC Shadow Board: Who Let the Hawks Out

As I mentioned previously, expectations have been building for a more hawkish leaning BoE following the FOMC meeting, this is also likely to have been further compounded by the shadow boards very hawkish assessment. All nine members of The Times BoE shadow MPC said the central bank should scrap the final GBP 50bln of QE, while four members added that the Bank should raise rates before the end of the year. Now while this is extremely unlikely to happen, what it does highlight is that with the UK backdrop continuing to improve the BoE have good grounds to become increasingly optimistic on the outlook.

Given that this is not an MPR notable changes to BoE guidance are likely to wait until August where the Bank will also likely taper its pace of asset purchases again. As risks are more skewed to the hawkish side, the main focus will be on the accompanying statement. In turn, a shift in the view of growth in the short run being “broadly balanced” or an acknowledgement that inflation may be slightly more sticky than previously assumed could be seen as more hawkish. That being said, heading into the meeting, positioning in GBP remains long with the move from 1.38 at the beginning of the week to 1.40 highlighting as much. Therefore, should the BoE use this meeting as a stock taking exercise, there is a possibility for some disappointment for bulls. As it stands, GBP/USD ATM overnight implied volatility suggests an implied move of +/- 0.5% (or 66pips).

My view is that the BoE statement will reflect a more optimistic outlook, one which will keep GBP on the front foot, particularly against the Euro. 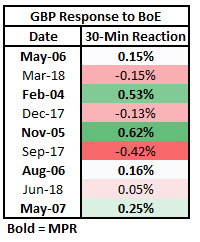 GBP/USD to Benefit from UK PMIs