A brief stint below 0.7300 in yesterday’s session following a stellar US retail sales report, while the Australian jobs data was unsurprisingly weak amid the impact of the latest lockdown measures. That said, my focus has switched to AUD/NZD, which had dropped to the lowest level since April 2020. Arguably, AUD/NZD short is the most consensus trade out there, given the narrative of monetary policy divergence as the RBNZ gear up for its first rate hike since 2014 next month, while the RBA continue to suggest that rates will not rise since until 2024. However, with data also remaining in favour of the Kiwi, I am starting to wonder if this is as good as it gets and thus looking for a reversal in the trend for AUD/NZD in the next few weeks.

Reasons for an AUD/NZD Bottom

There is a good chance that the RBNZ raises rates by 50bps at the upcoming, which will likely see AUD/NZD spike lower initially. However, I will be expecting AUD/NZD to bottom from there on, as the bar for a hawkish surprise is set high due to NZ rates pricing in an aggressive tightening path.

Back in 2013/14, AUD/NZD drifted lower as the RBNZ discussed the possibility of raising interest rates before finding a bottom the moment the RBNZ hiked. My view is that we will see similar price action after the RBNZ hikes, with AUD/NZD finding a bottom. This in effect is a sell the rumour, buy the fact. 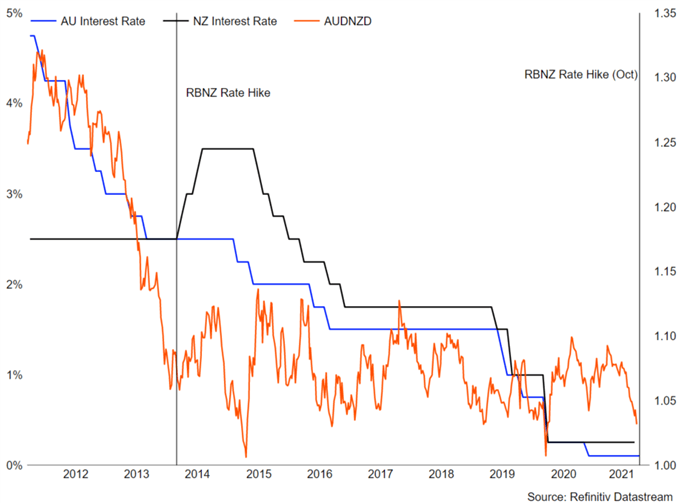 In the past 20yrs, parity in AUD/NZD has only occurred once, which was during the initial coronavirus shock in March 2020. Good support has generally been found at 1.0250. 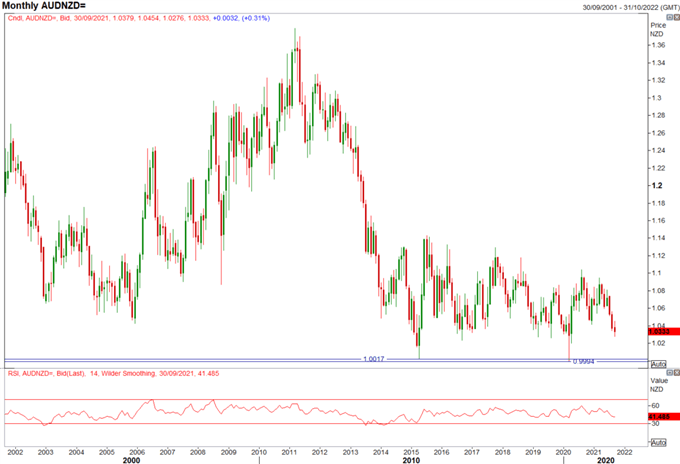