Nasdaq 100 Retreats Ahead of Powell Speech, APAC to Open Lower

Wall Street equities pulled back from record levels on Thursday as investors mulled hawkish comments by St Louis Fed President James Bullard ahead of the Jackson Hole symposium. Bullard said on a TV show that he wants to see the central bank begin to scale back asset purchases to stave off inflation, and it may need to get “aggressive” if the tapering does not contain inflation.

Investors are eyeing Jerome Powell’s speech at the Jackson Hole symposium at 10am ET later today. His speech will be closely scrutinized for clues about the Fed’s tapering plan. Some market participants believe that the tapering program may be conducted in a slower-than-expected way, therefore it may not trigger a meaningful pull back in asset price.

Asia-Pacific markets may continue to trail behind their US peers due to lingering viral concerns and a widening crackdown on private sectors in mainland China. Chinese stocks listed in the US fell overnight, including Tencent (-1.53%), Alibaba (-2.28%) and Nio (-1.77%).

Meanwhile, weekly initial US jobless claims data came in line with expectations. Some 353k unemployment claims were filed last week, compared to a 350k estimate. The previous week’s figure was revised up slightly to 349k from 348k. The unemployment claims have been declining over the last few months, underscoring the resilience in the labor market against a viral resurgence.

Asia-Pacific markets look set to open lower on Thursday. Futures in Japan, mainland China, Australia, Hong Kong, South Korea, Taiwan, Singapore, India and Thailand are all in the red, whereas those in Malaysia are in the green.

The Nasdaq 100 index hit a key resistance level at 15,300 (the 127.2% Fibonacci extension) and has since pulled back. Breaching this level may open the door to further gains with an eye on 15,950. A pullback from here may bring prices to the 20-Day SMA line for immediate support. The bearish MACD indicator suggests that downward momentum may be building. 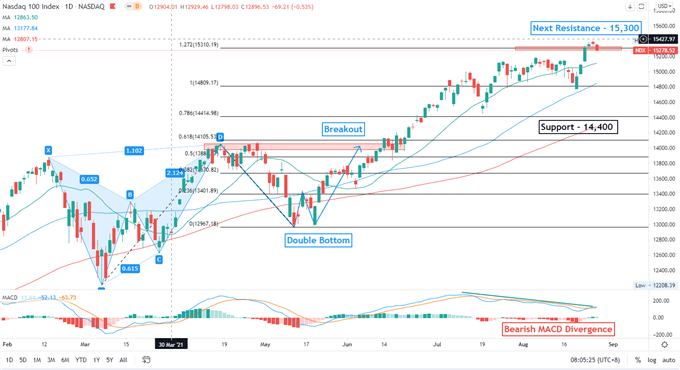 The Nikkei 225 index remains in a “Descending Channel” formed since February. The floor and ceiling of the channel may be viewed as immediate support and resistance levels respectively. The overall trend remains bearish-biased, as suggested by the downward-sloped SMA lines. The MACD indicator is trending below the neutral line, suggesting that upward momentum may be weak. 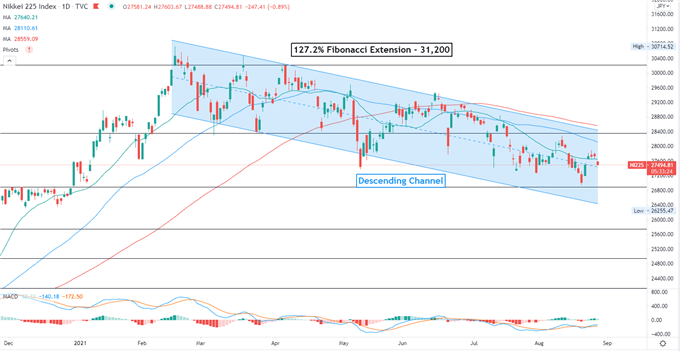 The ASX 200 index pulled back sharply to test an immediate support level at 7,500 – the previous resistance. The overall trend remains bullish-biased, as suggested by the consecutive higher highs and higher lows formed over the past few months. The MACD indicator formed a bearish crossover after hitting trendline resistance, suggesting that selling pressure may be prevailing. 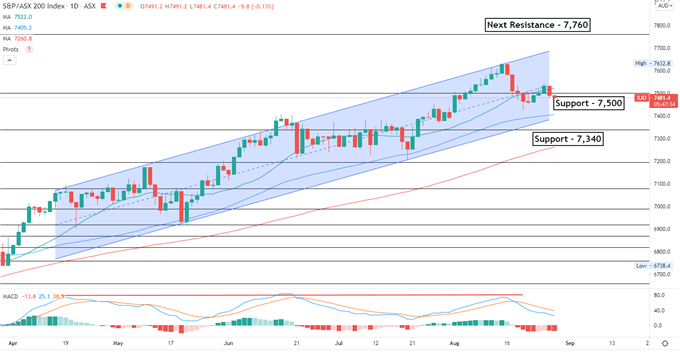