Natural gas prices began the week on the backfoot as weather forecasts for the beginning of December were warmer than previously expected. Despite U.S. supply being down relative to this time last year, mild forecasts for the West Coast weighed heavily on price, with front month Henry Hub futures falling by over 5%. Revisions to forecasts made on Friday showed that temperatures throughout the central and western parts of the U.S. would be “above” and “much above” normal temperatures for this time of year.

Front-month contracts have notably fallen to keep support around $4.800 MMBtu, with price effectively rangebound below $5.200. Ahead of Wednesday’s EIA data release, experts are forecasting a draw of roughly 20 Bcf. The fundamental construct remains mixed, as predictions of a dwindling U.S. stockpile clashes with mild weather forecasts. Should bulls regain control and break higher out of the current range, the 50-day moving average may be a key first target around $5.368. However, a reversal lower on any potentially prolonged stretch of warmer weather could see a rush lower to a key pivot zone above $4.500. 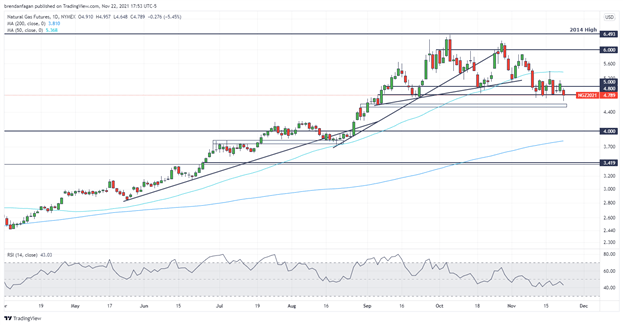 With natural gas prices cooling off along with other important commodities, central bankers at the Federal Reserve may begin to breathe a sigh of relief in regard to inflation. Falling energy costs would be beneficial to producers, many of whom in Europe have had to shutter their doors over rising input costs. While that has not happened on a large scale in the United States, lower energy costs may be one of the first dominos to fall in support of the transitory argument on inflation. Falling producer prices could potentially stop the squeeze on consumer prices, offering some much desired relief to many in Washington and around the United States.