The New Zealand Dollar fell against the US Dollar overnight and may be set to underperform going into the weekend. Across the Tasman, the Australian Dollar managed to inch higher against the Greenback. A risk-off theme appears likely to carry over into today’s Asia-Pacific session after stocks pared gains into the New York closing bell. The Nasdaq came under additional pressure after the bell on a poor Netflix’s earnings report, which pushed $NFLX down over 10% after hours.

The divergence in performance between NZD and AUD likely relates to the relative expectations between them. The Reserve Bank of New Zealand (RBNZ) was much quicker in normalizing policy, while the Reserve Bank of Australia appears to be resistant against any near-term hike, although markets are starting to price in a potential rate hike later this year.

While higher rates usually serve as a tailwind for a currency, the more aggressive rate outlook was already priced into the Kiwi Dollar, leaving it with less relative upside potential than the Australian Dollar. AUD/NZD is up more than 2% since the RBNZ hiked rates back in October. A strong Australian employment report released earlier this week bolstered the case for an RBA rate hike. AUD may benefit further if these rate hike bets continue to accelerate.

The Australian Dollar is also likely receiving some support from Thursday’s move by China to relax lending conditions. The People’s Bank of China (PBOC) lowered the one- and five-year loan prime rates (LPRs) by 10 and 5 basis points, respectively. That bodes well for the Aussie Dollar, given the two countries trade many goods and services, particularly in commodities such as iron ore.

Meanwhile, New Zealand is preparing for Omicron to soon spread through its community. Prime Minister Jacinda Ardern said community spread of Omicron through New Zealand would be impossible to prevent, but that the island country will not go back into lockdowns. New Zealand boasts a vaccination rate of over 93% for those over 12 years old, including a booster rate north of 50%. That will likely help keep hospitalizations and deaths at a minimum once Omicron does permeate the border.

This morning, Japan’s core inflation rate for December stayed constant at 0.5% year-over-year, missing the 0.6% consensus forecast, according to a Bloomberg survey. The Japanese Yen has performed well against its major peers this week as the safe-haven currency benefits from volatility in equity markets brought on by sharp increases in government bond yields. Australia will report new home sales (Dec) later today, and Hong Kong business confidence for the first quarter is set to cross the wires.

NZD/USD remains largely contained within its range set back in December, with the pair moving toward the December low (0.6701). The 78.6% Fibonacci may offer a level of support, but a break lower would immediately open up the bottom of the range. A bounce higher may have bulls target the falling 50-day Simple Moving Average (SMA), with potential intermediate Fib resistance. 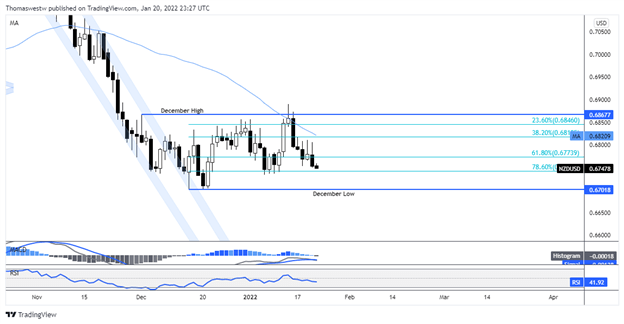