NZD/USD depreciates for six consecutive days as the Federal Reserve unveils a more detailed exit strategy, and the exchange rate may attempt to test the September 2020 low (0.6512) as the Relative Strength Index (RSI) sits in oversold territory.

NZD/USD clears the November 2020 low (0.6589) as it trades to a fresh yearly low (0.6570), and the oversold reading in the RSI is likely to be accompanied by a further decline in the exchange rate like the price action seen during the previous month.

The weakness in NZD/USD looks poised to persist until the RSI climbs back above 30 to indicate a textbook buy signal, and it seems as though developments coming out of the US will continue to sway the exchange rate amid the limited reaction to the larger-than-expected rise in New Zealand’s Consumer Price Index (CPI).

Nevertheless, heightening price pressures may encourage the Reserve Bank of New Zealand (RBNZ) to further normalize monetary policy as the headline reading for inflation climbs to 5.9% from 4.9% per annum in the fourth quarter of 2021 to mark the highest reading since 1990, and it remains to be seen if the central bank will raise the official cash rate (OCR) at its next meeting on February 23 after delivering back-to-back rate hikes last year.

Until then, NZD/USD may continue to depreciate as it extends the series of lower highs and lows from earlier this week, and the tilt in retail sentiment looks poised to persist as traders have been net-long NZD/USD since mid-November. 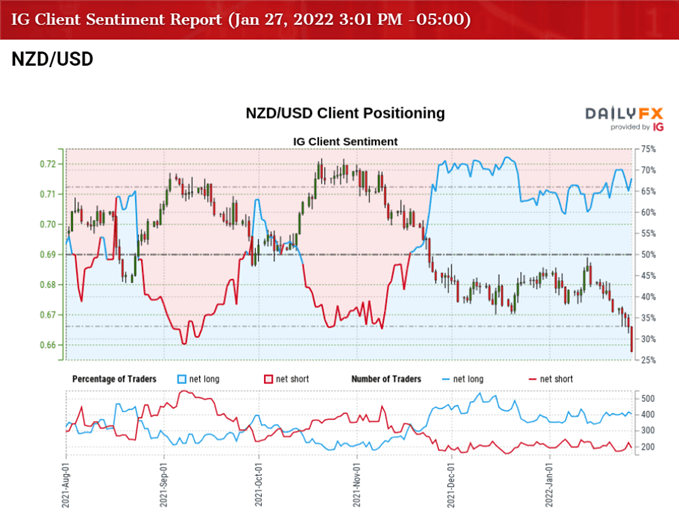 The IG Client Sentiment report shows 66.77% of traders are currently net-long NZD/USD, with the ratio of traders long to short standing at 2.01 to 1.

With that said, NZD/USD may attempt to test the September 2020 low (0.6512) as the RSI pushes below 30, with the oversold reading in the oscillator likely to be accompanied by a further decline in the exchange rate like the price action seen during the previous month.