Asia-Pacific markets have seen a mixed week of trading, with major equity indexes across the region seeing modest gains, while most currencies fell against a stronger US Dollar. Wall Street stocks closed mostly lower, with the small-cap Russell 2000 index seeing a sharp 3.93% decline on the week. Falling Treasury yields have worked against cyclical trades.

The New Zealand Dollar saw inflows this morning after second-quarter inflation crossed the wires at 3.3% versus the forecasted 2.7% figure and rising from 1.5% in the first quarter. The island nation also saw an improved business PMI print for June, rising to 60.7 from 58.6. The spike in inflation confirms the Reserve Bank of New Zealand’s (RBNZ) outlook on rising prices in the near term. The July Monetary Policy Statement (MPS) included:

“The Committee reiterated that there will be near-term spikes in headline CPI inflation over the June and September quarters. These reflect factors that are either one-off in nature, such as high oil prices, or expected to be temporary in duration, such as supply shortfalls and higher transport costs.”

That said, the RBNZ’s policy path is likely to remain unchanged given their transitory view on inflation transitory, much like the Federal Reserve’s stance. However, unlike the Fed, the RBNZ has already begun to pull back policy. Large-Scale Asset Purchases (LSAP) will terminate on July 23, a move that is seen as prefacing a hike in the central bank’s Official Cash Rate (OCR), putting it near the front of the pack for easing policy post-pandemic. Friday’s inflation print substantiates the hawkish outlook.

New Zealand government bonds sold off in response to the hawkish RBNZ move, pushing yields higher. The Kiwi bond’s 10-year yield is on track to gain over 6% this week. Elsewhere, Treasury and Australian Government Bond yields continued to drop, down near 4.55% and 7.01%, respectively. The 10-year yield differential between the New Zealand and Australian notes widened to 37 basis points this week, which has seen AUD/NZD drop over half a percent. A country’s currency typically strengthens when the yield differential increases as the higher comparative rate attracts foreign capital.

Elsewhere, the Chinese Yuan is trading mostly unchanged versus the US Dollar after China’s Q2 GDP print missed expectations. Retail sales and industrial production figures also missed expectations and confirmed a slowdown in the economic powerhouse’s growth. The data has fueled speculation that the People’s Bank of China may more broadly ease policy following a cut to reserve requirement ratios for banks.

The New Zealand Dollar gained steam against the US Dollar this morning, fueled by the higher-than-expected inflation print. The 26-day Exponential Moving Average (EMA) turned around an intraday move higher after pressuring upside price action in the prior day’s sessions. MACD and RSI oscillators are both tracking higher, indicating an upside move may win out. 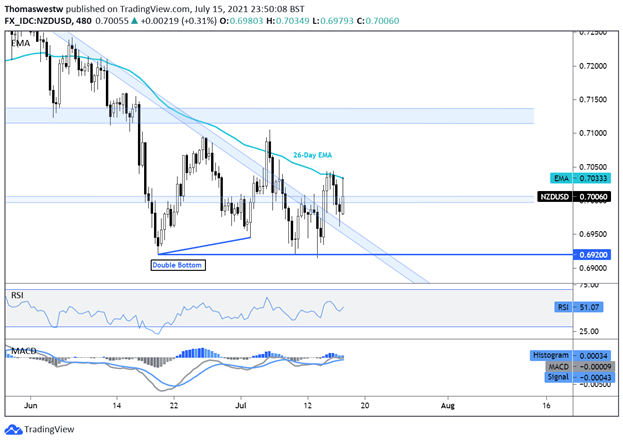 The Worst Toxic Fabrics (and What to Look for Instead)