The price of oil falls back from a fresh yearly high ($87.10) amid an unexpected rise in US inventories, and looming developments in Relative Strength Index (RSI) may indicate a larger pullback for crude if the oscillator falls below 70 to offer a textbook sell signal.

Crude fills the price gap from earlier this week as US inventories increase for the first time November, with stockpiles rising 0.515M in the week ending January 14 versus forecasts for a 0.938M decline.

It remains to be seen if the Organization of Petroleum Exporting Countries (OPEC) will respond to the development as the group appears to be on a preset course in restoring production to pre-pandemic levels, and the recent weakness in the price of oil may turn out to be a correction in the broader trend as the group stays on track to “adjust upward the monthly overall production by 0.4 mb/d.”

Looking ahead, OPEC and its allies may stick to the same schedule at the next Ministerial Meeting on February 2 as the most recent Monthly Oil Market Report (MOMR) still projects strong demand for crude oil, with the report revealing that “in 2022, world oil demand growth has been kept unchanged at 4.2 mb/d with total global consumption at 100.8 mb/d.” 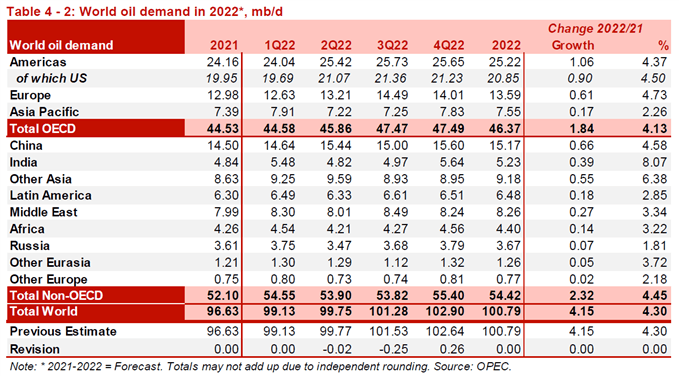 As a result, it seems as though OPEC and its allies will be undeterred by the Omicron variant as “projections for economic growth remain robust,” and the group may retain the current schedule over the coming months as “demand for OPEC crude in 2022 also remains unchanged from the previous month to stand at 28.9 mb/d, around 1.0 mb/d higher than in 2021.”

In turn, the price of oil may exhibit a bullish trend in 2022 as a deeper look at the figures from the Energy Information Administration (EIA) show weekly field production holding steady at 11,700K for the second week, and the tepid recovery in US output may act as a backstop for the price of oil as indications of limited supply along with expectations for stronger demand.

With that said, the recent weakness in the price of oil may turn out to be a correction in the broader trend, but the Relative Strength Index (RSI) warns of a larger pullback for crude as the oscillator falls below 70 to offer a textbook sell signal.