Rand Fights Back Post-CPI and Bullard

Last nights State of the Nation Address (SONA) had little to do with the post-US CPI moved on the rand. Mostly US factors dictated the local currency movement however President Ramaphosa made some telling points. Markets did not take heed to the address as nothing substantial was included. Financial markets need to see actioned policies before potentially influencing price action.

Moving back to the US, the Fed’s Bullard made some hawkish comments after the inflation print, stating that the Fed should raise rates by 100bps by the 1st of July. This prompted a dollar rally which interestingly dipped immediate after the CPI release. The influence of the dollar and Fed on the rand really shone through yesterday dwarfing the President’s address.

Today’s open saw a digestion by markets leaving the dollar slightly weaker in early trading giving some gains back to the rand.

Commodities across the board took a dip on the back of a stronger dollar including the rand-linked coal, platinum, gold and iron ore stifling ZAR upside.

The economic calendar is comparatively light today with US consumer sentiment scheduled later today which could provide some price volatility on USD crosses. 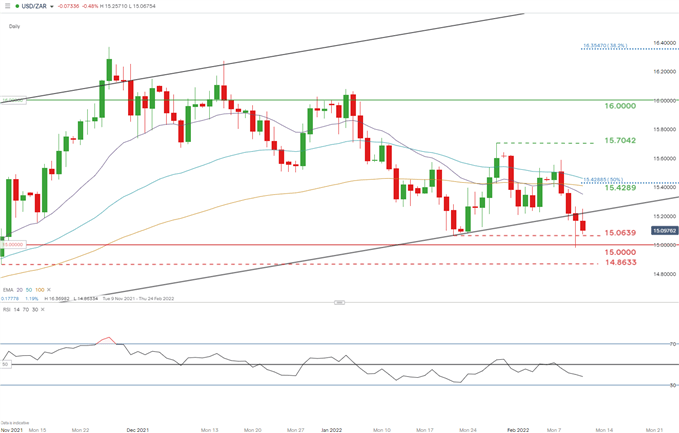 Yesterday’s lower long wick pushed prices back around channel support however with the candle close above the recent swing low. Traditionally, a lower long wick points to subsequent bullish momentum which may still play out despite today’s dollar weakness.