Wall Street stocks climbed after Fed Chair Jerome Powell reiterated his dovish stance in a semiannual monetary policy report to the Congress. He said that the economy’s progress is still a ways off to reaching the standard of ‘substantial further progress’, and the labor market in particular is still well below pre-Covid levels. Therefore, the central bank may continue its current pace of asset purchase and will be patient in tightening monetary stimulus.

The US Dollar fell alongside Treasury yields after his speech, which soothed tapering fears after Tuesday’s core CPI data stoked inflation concerns. Yet, tapering will remain a key market theme in the months to come. Yesterday, both the RBNZ and BoC announced a scaling back their pandemic-era asset purchases this month as the economic recovery gathers pace.

US earnings season kicked off with an upbeat tone, with results from Morgan Stanley, Goldman Sachs, Bank of America, Wells Fargo and Citigroup all topping analysts’ estimates. Market reactions were somewhat mixed however, reflecting that traders were perhaps “buying expectations, and selling facts”.

Asia-Pacific markets are mixed at the beginning of Thursday’s trading session. Futures in Japan, mainland China, Hong Kong, South Korea, Singapore, Malaysia and Thailand are in the red, whereas those in Australia, Taiwan and India are in the green.

Japan’s Nikkei 225 index looks set to extend lower after falling 0.38% on Wednesday. Stocks in Tokyo are under selling pressure as investors mull gains in new coronavirus cases in Japan caused by the Delta variant of the Covid-19 virus. A stronger Japanese Yen may also weigh on stocks as it makes the country’s exports more expensive to overseas buyers. 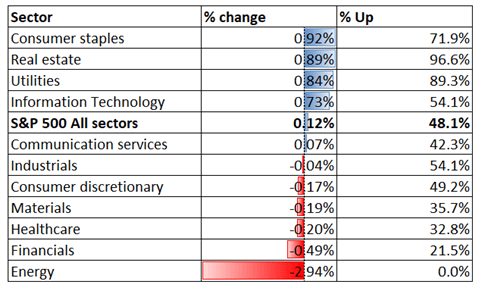 The S&P 500 index breach above a key resistance level at 4,290 and thus opened the door to further upside potential. The next key resistance level can be found at 4,650 – the 161.8% Fibonacci extension. The overall trend remains bullish-biased as prices continue to trend higher within a “Ascending Channel” formed since November. The MACD indicator continued to trend higher ,underscoring upward momentum. 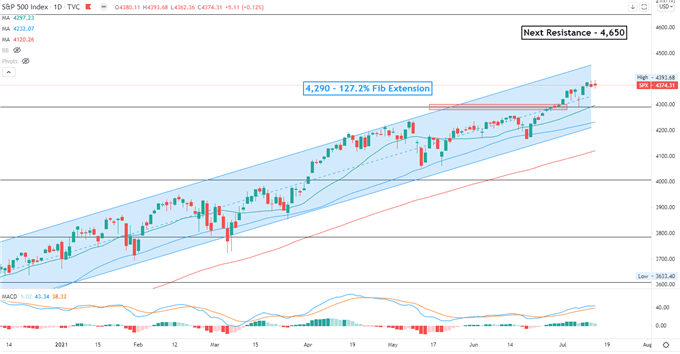 The Nikkei 225 index remains in a “Descending Channel” formed since February. The floor and ceiling of the channel may be viewed as immediate support and resistance levels respectively. The overall trend remains bearish-biased as suggested by the downward-sloped SMA lines. The MACD indicator is oscillating at around the neutral line, suggesting that prices may be lack of a clear direction. 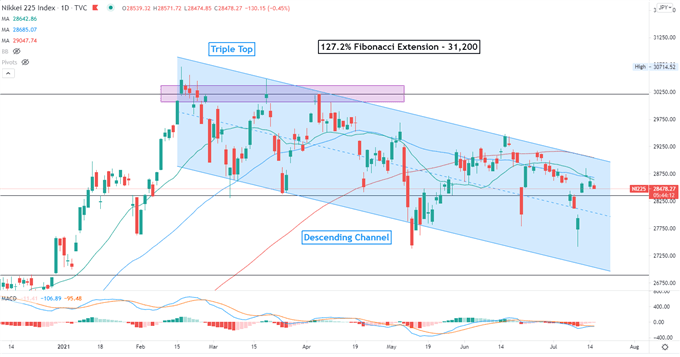 The ASX 200 index entered a tight range between 7,230-7,370 over the past few weeks, waiting for fresh catalysts for a breakout. The overall bullish trend remains intact as suggested by the upward-sloped SMA lines. The MACD indicator is about to form a bullish crossover, suggesting that upward momentum may be building. 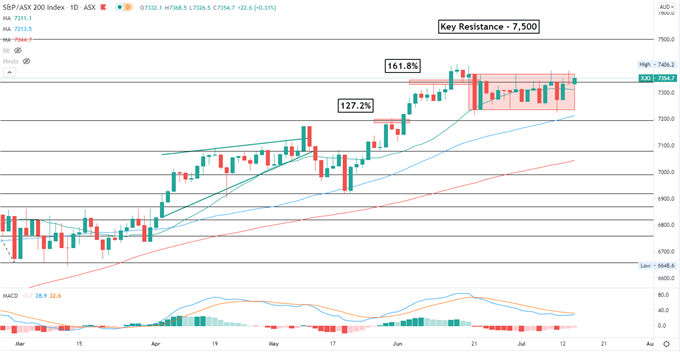 US Dollar Faces Day Two of Powell Testimony. Will It Hold Up?