Wall Street equities tumbled on Thursday as US inflation readings topped market expectations, spurring fears that the Fed may tighten monetary policy more aggressively to rein in price levels. The consumer price index (CPI) hit a four decade high of 7.5%, compared to a 7.3% estimate. The core reading, which excludes volatile food and energy items, surged 6% in January, compared to a 5.9% estimate. This suggests that price pressures are probably more ‘entrenched’ than expected, urging the Fed to raise interest rates and end its asset purchasing program at the March policy meeting.

The implied probability of a 50bps rate hike in March has surged to 89.9% from 24% a day ago, according to CME’s FedWatch tool. Meanwhile, St. Louis Fed Chair James Bullard said the central bank should raise rates by 100bps by 1 July, inferring four quarter-point hikes over the next three meetings. He will not rule out the possibility of an emergency rate hike in between the scheduled policy reviews. His hawkish-biased view further strengthened the case of Fed tightening, resulting a broad pullback in equities and bonds overnight.

The Nasdaq 100 index led the decline, as the rate-sensitive and comparatively more expensive tech sector is more vulnerable to interest rate hikes and the withdrawal of liquidity. Yield on 10-year US Treasuries surpassed 2% mark for the first time since August 2019, further weighing on risk assets. This is because higher rates make their intrinsic value lower when future cashflows are discounted back at higher risk-free rates. Real estate and information technology were among the worst performing sectors overnight. 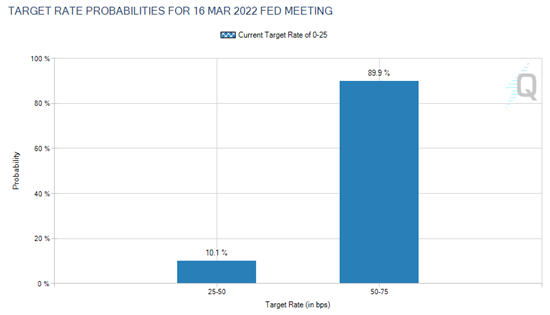 Meanwhile, weekly initial US jobless claims data came in at 223k, compared to a 230k estimate. The number of people filing for unemployment claims has been falling over the past three weeks, underscoring a tight market condition amid a gradual exit from Omicron-related restrictions.

Asia-Pacific markets look set to open lower on Friday following a sour lead on Wall Street.Futures in mainland China, Australia, Hong Kong, Taiwan, Singapore and Indonesia are in the red, whereas those in South Korea, Malaysia and Thailand are in the green. Japanese markets are shut for a holiday. 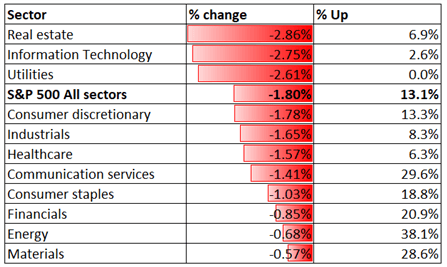 The S&P 500 index may have entered a meaningful correction after breaching below an “Ascending Channel” as highlighted on the chart below. Prices have likely formed a “Double Top” chart pattern, which is commonly viewed as a bearish trend-reversal indicator. Immediate support level can be found at around 4,300 – the previous low. The MACD indicator formed a bullish crossover beneath the neutral midpoint, suggesting that a technical rebound maybe underway but the overall momentum remains weak. 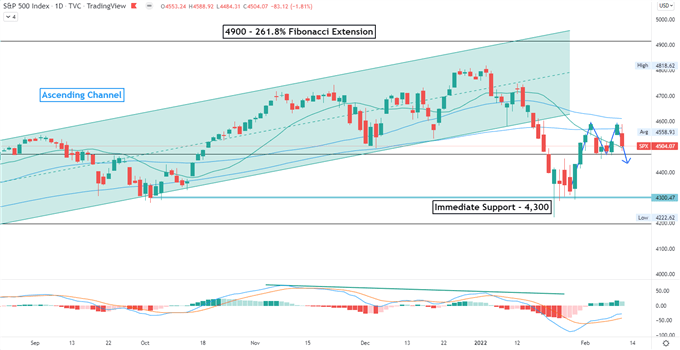 The Hang Seng Index (HSI) has likely broken a “Falling Wedge” pattern from the upside, as highlighted in the chart below. Prices are eyeing a key resistance level of 24,900, breaching which may expose the next resistance level of 25,600. The MACD indicator formed a bullish crossover and trended higher, suggesting that bullish momentum may be dominating. The ASX 200 index is attempting to return to the range-bound zone between 7,200 and 7,500, riding a strong technical upswing. A successful attempt signals a bullish trend reversal and reveals the next resistance level of 7,340. The MACD indicator formed a bullish crossover beneath the neutral midpoint, suggesting that a technical rebound is underway. 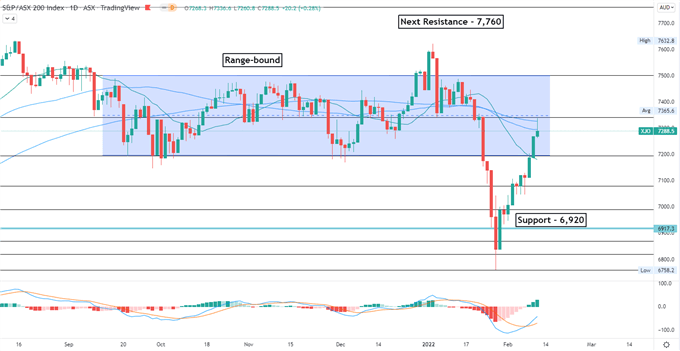