A much weaker than expected NFP headline at 235k vs 750k, while the prior reading had been revised higher to 1053k from 943k. The unemployment rate fell 0.2ppts to 5.2% matching expectations with the labour force participation rate remaining unchanged at 61.7%. Elsewhere, average earnings beat expectations on both the monthly and yearly rate. As such, while the headline is somewhat of a shocker, markets had been positioned for soft report given the weaker ADP and contraction in ISM employment index, while in terms of the details, they are relatively firm, making for an overall mixed report.

In reaction to the headline, the USD came under immediate pressure breaking below the 92.00 handle alongside yields, while the gold rose to its best levels of the day to hit a high of 1829. However, given the details are relatively firm than what the shocking headline would suggest, the market reaction has reversed back to pre-announced levels. This data is unlikely to notably alter the Fed’s tapering timeline given that Powell’s JH speech had essentially hinted that September would be too soon for an announcement. 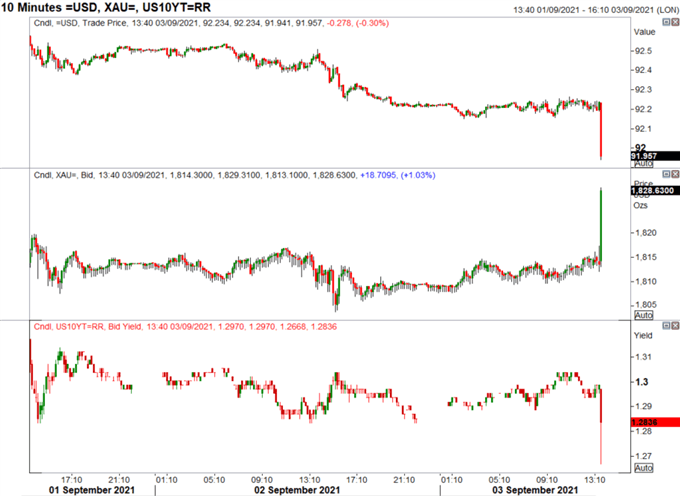