US Dollar Faces Day Two of Powell Testimony. Will It Hold Up?

Fed Chair Jerome Powell walked a fine line on the first day of semi-annual testimony before the US Congress. The recent run-up in inflation took top billing as expected. The markets seemed to extract a narrowly dovish tilt from his carefully calibrated answers, pushing up gold prices as front-end bond yields fell.

The US Dollar weakened too, but held up conspicuously well considering the backdrop. Prices remained well within recent trading ranges, oscillating near the highs of the year against most of the Greenback’s G10 counterparts. That seems remarkably reserved relative to the action in other Fed policy proxies.

Another test of USD resilience beckons today as Mr Powell’s testimony continues. Having stood before the House yesterday, he will now move to the Senate. Carbon-copy prepared remarks aside, the questioning session may yet trigger a market-moving soundbite. The Chair will try his utmost to avoid this.

Indeed, the Fed’s strategy seems quite familiar: begin the delicate preparations for stimulus withdrawal while steadily soothing jittery markets to prevent a repetition of the 2013 “taper tantrum”. Yesterday’s Congressional outing in the wake of June’s momentous FOMC meeting is a case in point.

With that in mind, it may be telling to see if the US currency holds up under the weight of another dovish-leaning Powell appearance. When market action and incoming news-flow seem to clash, the price is almost always right. Avoiding a clear break lower now may thus speak to notable underlying strength.

The New Zealand Dollar is having a curiously hard time building momentum against its US counterpart despite a surprisingly hawkish turn at the RBNZ and Mr Powell’s calming pronouncements. NZD/USD remains locked in a downtrend traced out since late May.

A formidable resistance block runs up through 0.7138. A daily close above that is probably a pre-requisite for neutralizing near-term selling pressure. Critical support is in the 0.6923-43 zone, marked by the late-March low. Breaching that barrier may set the stage for a descent toward the 0.68 figure. 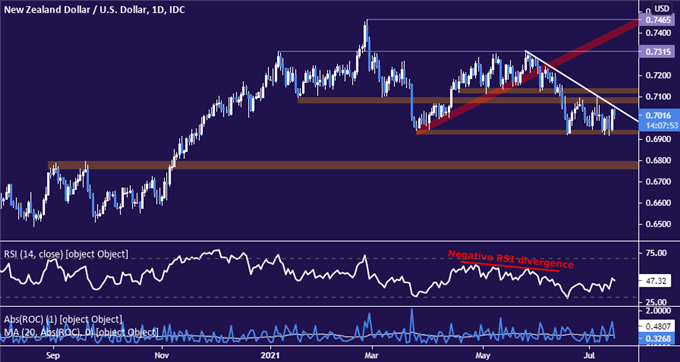