The Central Bank of Brazil raised the benchmark Selic rate by 100 basis points (bps) on Wednesday in an effort to curb rampant inflation. The 100 bps hike was in line with estimates and follows a 100 bps hike at the central bank’s previous meeting. Analysts had been forecasting noticeable hikes to the benchmark rate, with some going as far as predicting a hike of 150 basis points. Central bank officials also revealed they are forecasting an additional 100 bps hike at the next policy meeting in October.

Brazil has notably struggled with inflation over the last 12 months, forcing the nation’s central bank into a more hawkish policy stance. Unwelcomed rises in consumer prices has forced the Central Bank of Brazil to hike considerably at its last two policy meetings. Severe drought has accelerated upward pressure on energy prices, exacerbating the sting being felt by consumers. The Brazilian central bank’s inflation target remains just below 4%, but annual CPI continues to push higher toward 10%. 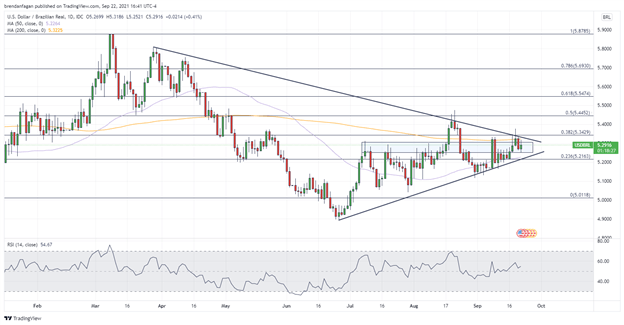 USD/BRL could continue to gyrate following Wednesday’s FOMC meeting, in which Federal Reserve Chair Jerome Powell indicated that a taper of asset purchases is “imminent.” With the Fed moving toward tightening and the BCB well and truly there, USD/BRL may be subject to additional volatility in the coming weeks. Dollar strength in September has seen USD/BRL push back toward 5.30, but continued hawkish policy from the Central Bank of Brazil could see the cross retest the 50-day moving average or trendline support below.

Identifying The Value Of Community With AhoyConnect