USD/CAD retraces the decline from earlier this month as the Bank of Canada (BoC) retains the current policy at its last meeting for 2021, and fresh data prints coming out of the US may fuel a further advance in the exchange rate as evidence of stronger inflation puts pressure on the Federal Reserve to normalize monetary policy sooner rather than later.

USD/CAD extends the rebound from the monthly low (1.2606) as the BoC argues that “the economy continues to require considerable monetary policy support,” and it seems as though Governor Tiff Macklem and Co. are in no rush to implement higher interest rates as “the Bank’s extraordinary forward guidance on the path for the overnight rate is being maintained.”

It seems as though the BoC will stick to the same script at its next meeting on January 26 as the central bank remains “committed to holding the policy interest rate at the effective lower bound until economic slack is absorbed so that the 2 percent inflation target is sustainably achieved,” and the Canadian Dollar may continue to underperform against its US counterpart as the Federal Reserve appears to be on track to implement higher interest rates in 2022.

Looking ahead, it remains to be seen if the update to the US Consumer Price Index (CPI) will influence the Federal Open Market Committee (FOMC) as the headline reading is expected to increase to 6.8% from 6.2% per annum in October, which would mark the highest reading since December 1981.

In addition, the core CPI is anticipated to show a similar dynamic as the index is seen climbing to 4.9% from 4.6% during the same period, and the development may push Fed officials to adjust the forward guidance for monetary policy as Chairman Jerome Powell strikes a hawkish tone in front of US lawmakers.

In turn, USD/CAD may continue to retrace the decline from the monthly high (1.2854) ahead of the FOMC rate decision on December 15, but the recent reversal in retail sentiment looks poised to persist as the exchange rate trades within broad range in the second half of 2021. 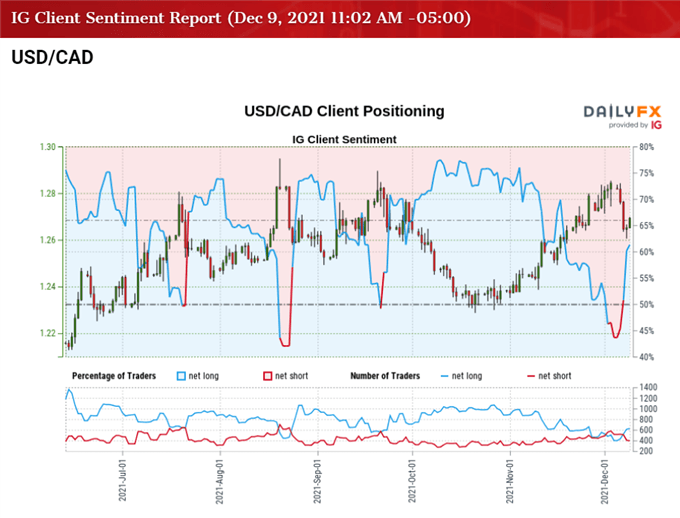 The IG Client Sentiment report shows 64.72% of traders are currently net-long USD/CAD, with the ratio of traders long to short standing at 1.83 to 1.

The number of traders net-long is 9.73% higher than yesterday and 38.15% higher from last week, while the number of traders net-short is 11.14% lower than yesterday and 36.01% lower from last week. The rise in net-long interest has fueled the reversal in retail sentiment as 53.90% of traders were net-long USD/CAD at the start of December, while the decline in net-short position comes as the exchange rate extends the advance following the BoC meeting.

With that said, the update to the US CPI may keep USD/CAD afloat as evidence of higher inflation puts pressure on the FOMC to normalize monetary policy sooner rather than later, and the exchange rate may stage another attempt to test the September high (1.2896) as it initiates a series of higher highs and lows off of the monthly low (1.2606).

Thoughtful Gifts For The Holiday Season