USD/CAD Rate to Face US and Canada Employment Reports

USD/CAD approaches the weekly high (1.2457) as it retraces the decline following the Federal Reserve interest rate decision, and the exchange rate is likely to face increased volatility later this week as both the US and Canada are slated to releases updated figures surrounding the labor market.

USD/CAD Rate to Face US and Canada Employment Reports

USD/CAD appears to be on track to test the 200-Day SMA (1.2479) as it extends the advance from earlier this week, but lack of momentum to push above the moving average may generate range bound conditions in the exchange rate as the Federal Open Market Committee (FOMC) and Bank of Canada (BoC) carry out an outcome-based approach for monetary policy.

As a result, key data prints on tap for later this week may influence the near-term outlook for USD/CAD as Canada’s Employment report is anticipated to show a 50.0K expansion in October compared to the 157.1K print last month, while the US Non-Farm Payrolls (NFP) report is expected to increase 450K during the same period following the 194K rise in September.

A pickup in US employment may keep the FOMC on track to wind down “the monthly pace of its net asset purchases by $10 billion for Treasury securities and $5 billion for agency mortgage-backed securities,” but a slowdown in Canada job growth may push the BoC to the sidelines as the central bank pledges to keep “the policy interest rate at the effective lower bound until economic slack is absorbed so that the 2 percent inflation target is sustainably achieved.”

In turn, USD/CAD may attempt to retrace the decline from the October high (1.2739) as the Relative Strength Index (RSI) continues to recover from oversold territory, and a further advance in the exchange rate may help to alleviate the tilt in retail sentiment like the behavior seen earlier this year. 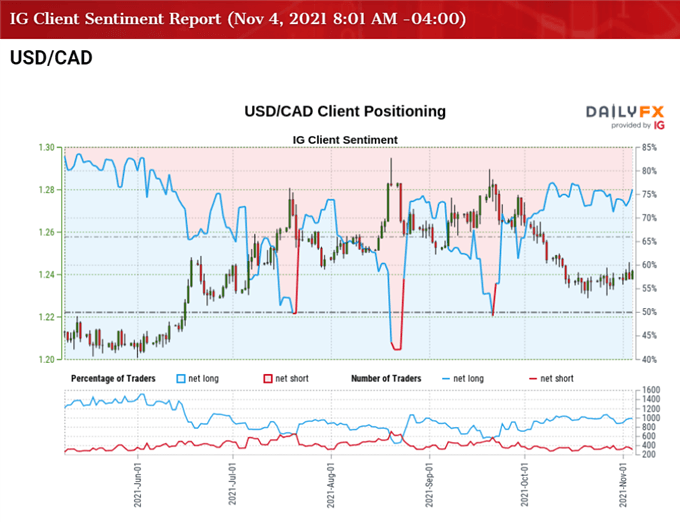 The IG Client Sentiment report shows 75.04% of traders are currently net-long USD/CAD, with the ratio of traders long to short standing at 3.01 to 1.

With that said, fresh data prints coming out of the US and Canada is likely to sway USD/CAD as both the Fed and BoC start to scale back monetary support, but the exchange rate may attempt to retrace the decline from the October high (1.2739) as the Relative Strength Index (RSI) continues to recover from oversold territory.