USD/CAD continues to pullback from a fresh monthly high (1.2938) following the kneejerk reaction to the Federal Reserve interest rate decision, and the exchange rate may face a larger correction over the coming days amid the failed attempt to test the yearly high (1.2949).

USD/CAD snaps the series of higher highs and lows carried over from the previous week as it tracks the broad range from the second half of the year, and the exchange rate may continue to give back the advance from the monthly low (1.2667) as the adjustment in the Fed’s forward guidance does little to fuel bets for an imminent rate hike.

According to the CME FedWatch Tool, market participants see a greater than 50% probability that the Federal Open Market Committee (FOMC) will keep the benchmark interest rate at the record low at the next quarterly meeting in March 2022.

The reading based on Fed fund futures suggests the upward revision in the interest rate dot plot has caught up with market expectations as Chairman Jerome Powell and Co. project three rate-hikes for 2022, and it remains to be seen if the FOMC will continue to alter the forward guidance in the year ahead as the central bank acknowledges that “price increases have now spread to a broader range of goods and services.”

In turn, USD/CAD may face a larger correction ahead the next Fed rate decision on January 26, 2022 as the advance from the monthly low (1.2667) fails to push the RSI into overbought territory, and the recent flip in retail sentiment may carry into the end of the year as the exchange rate trades within broad range in the second half of 2021. 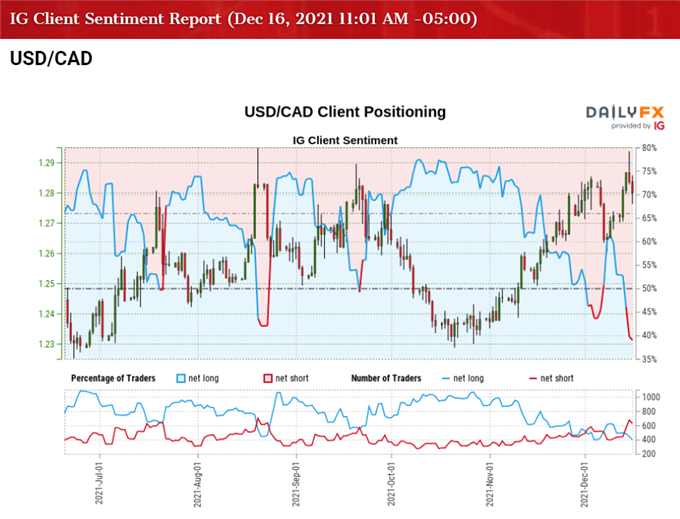 The IG Client Sentiment report shows 46.25% of traders are currently net-long USD/CAD, with the ratio of traders short to long standing at 1.16 to 1.

With that said, USD/CAD may face larger correction over the coming days as it snaps the series of higher highs and lows carried over from last week, and the Relative Strength Index (RSI) may continue to show the bullish momentum abating as it reveres ahead of overbought territory.