USD & Cross Asset Reaction to US CPI, AUD Headwinds Ahead of Jobs Report

US CPI, AUD Analysis and News

The main event of today will be the latest US CPI report, where expectations are for the headline to rise 0.4ppts to 5.8%, while the core figure is seen up 0.3ppts to 4.3%. In turn, this would mark a sixth consecutive month of inflation above 5% with the core reading at 4% or more for the fifth month in a row.

In recent months, figure 1. highlights that the market response to inflation data has been somewhat unorthodox, with higher than expected inflation, sometimes leading to USD depreciation, as the elevated inflation had largely been explained away by transitory factors such as used cars, earlier in the year. However, with inflation looking more persistent than central banks had initially anticipated, the argument for transitory inflation is diminishing by the month and thus today’s release may see a more orthodox response, particularly now that the Federal Reserve will be flexible on tapering. Meaning, higher (lower) than expected inflation leads to USD appreciation (depreciation).

Figure 1. Multi-Asset Response to US CPI

FX Volatility Remains Subdued Despite US CPI on Tap

Despite US CPI being a noteworthy risk event, FX options suggest otherwise, as implied volatility remains relatively tame. The Euro breakeven straddle is at 36pips (meaning, EUR/USD is expected to move in either direction by 36pips). To add to this, there are sizeable option expiries at 1.1550-55 (1.2bln), 1.1565-75 (2.1bln) and 1.1600 (1.5bln), which may well play its part in containing price action. Unless of course, there is a sizeable deviation from consensus. 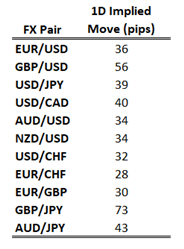 Elsewhere, for Aussie traders, the latest employment report is due tonight, which explains why vols are slightly higher for the currency relative to the rest of the pack. Reminder, that after last week’s push back on market pricing for rate hikes by the RBA, the key area to watch is the labour market, in particular wage data (out next week). That being said, while a better than expected labour report is likely to prompt a bid in the Australian Dollar, with iron prices remaining depressed and my short term view that equities will follow its short-term seasonal trend (Figure 2.), I suspect traders will be in a sell the rally mode for AUD. Speculative proxies such as Tesla have been taking a hit in recent sessions and should Cryptos follow this would add to my conviction of equities facing near-term headwinds. On the Aussie crosses, 1.0420 in AUD/NZD may be an area to look for pullbacks. 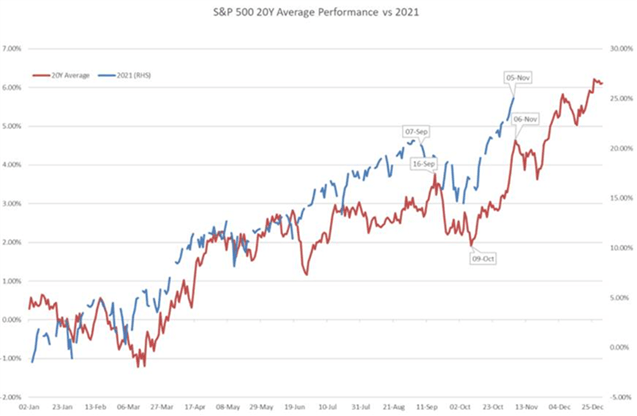