USD/JPY Chart Points Higher to Kick Off the Year

The Japanese Yen saw significant weakness against the US Dollar in 2021. USD/JPY gained in all but three months last year, with the currency pair hitting the highest level since January 2017 in November. US Dollar bulls controlled the narrative in Q4 2021, which puts prices on a strong footing to rise further in the new year.

USD/JPY made several key technical victories last year, including a climb above a descending trendline from the early 2017 swing high. That trendline capped upside movements in the pair for the preceding year until March 2021, when prices pierced above the level. The 200-week Simple Moving Average offered confluent resistance, but the levels turned to support, and prices subsequently broke higher. That strength saw a clean break above the psychologically imposing 110 handle.

The weekly chart highlights possible levels of resistance and support that may appear in Q1. The 61.8% Fibonacci retracement level from the 2015 high to 2016 low has already showed to be a sticky point in Nov. A break above that, however, puts focus on the late 2016 swing high at 118.665. Shortly above that level lies the 78.6% Fib, with a full retracement to the 2015 multi-year high serving as the next likely resistance point.

Alternatively, a move lower has several potential support levels. The rising 100-day SMA offers the first line of defence against a bearish move, with the moving average tracking shortly below price levels in December. The 200-day SMA sits in a nearly confluent position along the 110 psychological handle and the 38.2% Fibonacci retreat. The 2017 trendline comes into play just below those levels.

One point of concern is a negative divergence between prices and the Relative Strength Index (RSI), highlighted in red in the chart below. The divergence suggests that upside energy may be waning. USD/JPY bulls will want to see RSI break above the level around 75.54 the next time prices rally higher to break the negative divergence. 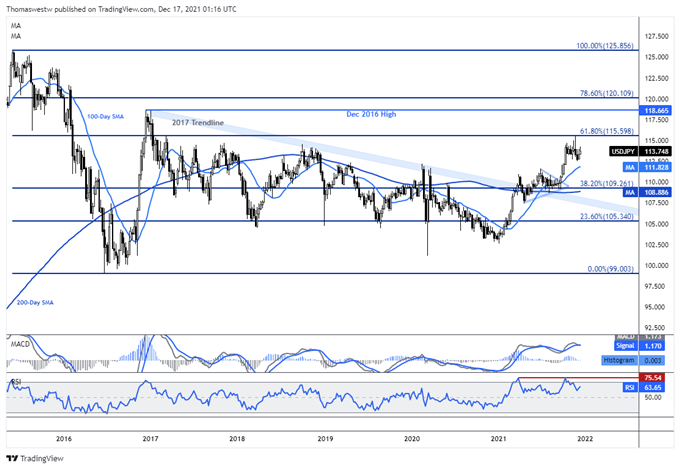