USD/JPY struggles to test the January high (116.35) as it pares the advance following the larger-than-expected rise in the US Consumer Price Index (CPI), but the recent rally raises the scope for a break of the yearly opening range as the exchange rate extends the series of higher highs and lows from the monthly low (114.15).

The recent advance in USD/JPY has largely removed the threat of a head-and-shoulders formation as it trades to a fresh monthly high (116.34), and expectations for an imminent shift in US monetary policy may keep the exchange rate afloat as longer-dated Treasury yields push to fresh yearly highs.

As a result, USD/JPY may stage further attempts to break out of the opening range for 2022 as the Federal Reserve prepares to implement higher interest rates, and the central bank may come under pressure to normalize monetary policy sooner rather than later as the CPI increases for the fifth consecutive month.

In response, the Federal Open Market Committee (FOMC) may adjust its exit strategy as the central bank plans to wind down its balance sheet later this year, and it remains to be seen if Chairman Jerome Powell and Co. will forecast a steeper path for the Fed Funds rate as the central bank is slated to release the updated Summary of Economic Projections (SEP) at its next interest rate decision on March 16.

Until then, USD/JPY may larger track the rise in US yields it negates the threat of a head-and-shoulders formation, and the diverging paths between the FOMC and Bank of Japan (BoJ)may continue to coincide with the crowding behavior seen in late-2021 as the recent flip in retail sentiment was short lived.

The IG Client Sentiment report showsonly 29.43% of traders are currently net-long USD/JPY, with the ratio of traders short to long standing at 2.40 to 1.

The number of traders net-long is 25.50% lower than yesterday and 21.19% lower from last week, while the number of traders net-short is 0.37% lower than yesterday and 21.92% higher from last week. The decline in net-long position comes as USD/JPY struggles to test the January high (116.35), while the jump in net-short interest has fueled the tilt in retail sentiment as 36.85% of traders were net-long the pair earlier this week.

With that said, USD/JPY may consolidate as it pulls back from a fresh monthly high (116.34), but recent price action raises the scope for a break of the yearly opening range as the exchange rate extends the series of higher highs and lows from the February low (114.15). 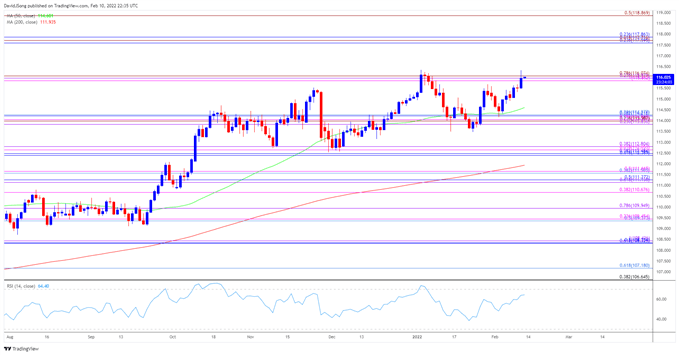