USD/JPY attempts to halt a five day decline in an effort to defend the November low (112.53), and fresh data prints coming out of the US may shore up the exchange rate as the Non-Farm Payrolls (NFP) report is anticipated to show a further improvement in the labor market.

A near-term correction appears to be unfolding in USD/JPY after it cleared the March 2017 high (115.50), with the decline from the yearly high (115.52) largely tracking the weakness in longer-dated US Treasury yields as the Omicron variant of COVID-19 clouds the outlook for the global economy.

Nevertheless, the NFP report may generate a bullish reaction in USD/JPY as the update is expected to show the US economy adding 550K jobs in November while the Unemployment Rate is seen narrowing to 4.5% from 4.6% during the same period.

Evidence of a stronger labor market may put pressure on the Federal Reserve to adjust its exit strategy as Chairman Jerome Powell pledges to “use our tools to make sure that higher inflation does not become entrenched,” and it remains to be seen if the central bank will forecast a steeper path for the Fed funds rate as officials are slated to update the Summary of Economic Projections (SEP) at their next interest rate decision on December 15.

Until then, the monthly opening range is in focus for USD/JPY as it attempts to defend the November low (112.53), but a larger pullback in the exchange rate may continue to alleviate the tilt in retail sentiment like the behavior seen earlier this year. 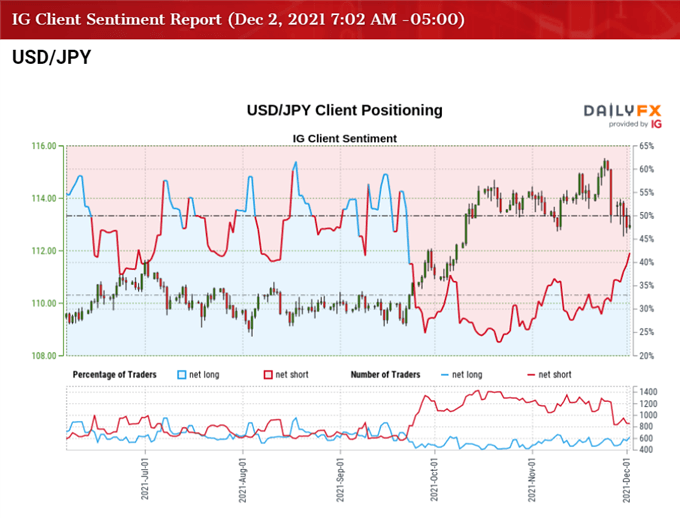 The IG Client Sentiment report shows 40.57% of traders are currently net-long USD/JPY, with the ratio of traders short to long standing at 1.46 to 1.

With that said, USD/JPY may exhibit a bullish trend throughout the remainder of the year amid the diverging paths between the Federal Open Market Committee (FOMC) and Bank of Japan (BoJ), and the decline from the yearly high (115.52) may turn out to be a near-term correction in the exchange rate as it appears to be defending the November low (112.53).