Last week’s civil unrest placed South Africa at the forefront of global headlines as looters, riots and violence resulted in Billions of Rands worth of damages, weighing heavily on market sentiment. For South African citizens, protests and riots are not uncommon but the extensive damages caused by these events are getting progressively worse, affecting both consumers and private businesses who are often left to pick up the pieces.

Although the Zuma trial was perceived to be the primary catalyst for the unrest (which began in the city of Pietermaritzburg (PMB) two weeks ago), an additional factor to consider can be attributed to deeper fundamental issues including consecutive lockdowns, corruption and increasing inequality amongst classes of the economy.

Despite the gloomy outlook, USD/ZAR remains relatively unfazed as the ongoing dovish tone of the US Federal Reserve and a decline in US Treasury Yields continue to hinder the ability for bulls to push above the 15.00 mark.

From a technical standpoint, USD/ZAR remains supported above the key psychological level of 14.50 which continues to provide support for the imminent move. With price action honoring key Fibonacci levels, short-term support remains at the above-mentioned 14.5 level with a break below that level bringing the 14.4% retracement level of the 2020 – 2021 move into play at 14.28.

In addition to this, the 8 and 34 Exponential Moving Average (EMA) are providing additional support and resistance for the longer-term move.

Honing in on the Daily chart, USD/ZAR continues to remain above both the 8 and 34 Exponential Moving Average, suggesting that the bullish narrative that has been prevalent in recent weeks continues to hold, at least for now. This rhetoric is further confirmed by the MACD that is trading relatively flat above the zero-line. 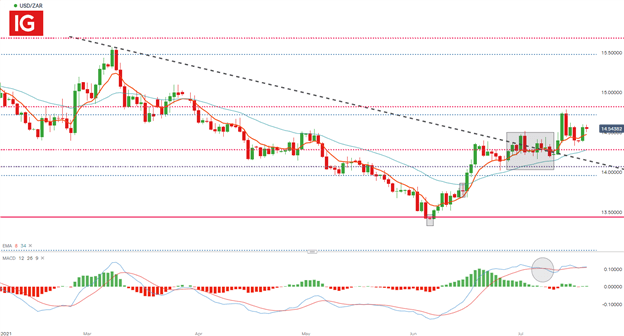 Fibonacci for a Multi-Market Trader’s Approach