Pound Sterling is likely to become even more data sensitive next week in light of UK inflation and employment data, as the local market adjusts to this transitional period of higher interest rates. Adding to the complexity of weekly forecasts is the recent escalation around Ukraine as the US and Japanese Presidents have instructed their respective citizens to leave Ukraine immediately.

On Friday it was announced that the UK economy had advanced 7.5% in 2021, the highest GDP growth rate since World War II. Figures for December were expected to decline in light of Omicron and related Government guidance during the holiday period but this did little to affect overall growth for the year.

The GBP/USD pair ended the London session up around 50 pips higher than at the start of the week despite a massive 123 pip move on Thursday after the release of US CPI, which beat forecasts of 7.3% to print at 7.5%.

Next week ushers in a sizeable amount of high importance data with market moving potential. Inflation continues to dominate top headlines and next week’s UK CPI data will help shed some light on whether inflation is continuing to accelerate. This far, a Reuters poll estimates the figure to be 5.4%, which equals December’s print, and may be interpreted as a potential slow down in price rises as inflation edges towards the Bank of England’s (BoE) forecasted figure of 7% in the spring

In the lead up to the CPI print, the Office for National Statistics (ONS) is set to release the employment figure for December. Unemployment is currently at 4.1% and according to a Reuters poll is expected to remain unchanged on Tuesday. Sticking with the labour market, ‘employment change‘ data for November is scheduled for release with no guidance as yet. The October figure showed an addition of 60,000 jobs. To round off the pick of UK data we have retail sales for January due on Friday after a disappointing holiday period that saw a year on year decline of 0.9%.

For GBP/USD traders, US data in the week ahead comprises of January retail sales and the release of the January FOMC minutes. Retail sales are expected to improve (+1.7%) in contrast to the prior figure of -1.9%. The FOMC minutes may turn out to be less insightful than previous releases due to recent Fed members having expressed the need to hike rates with greater urgency in the last few days and in response to the hot inflation data. 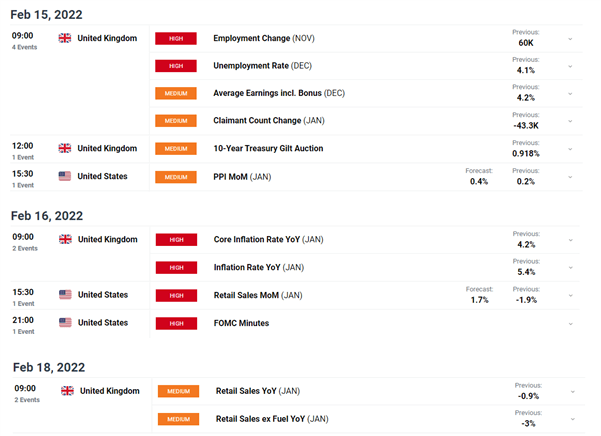 GBP rates markets imply a further 5 rate hikes before year end while the US Fed funds futures anticipate 7 hikes. As such, both markets have priced in a hawkish central bank making it difficult to anticipate directional moves, hence the recent choppy price action. 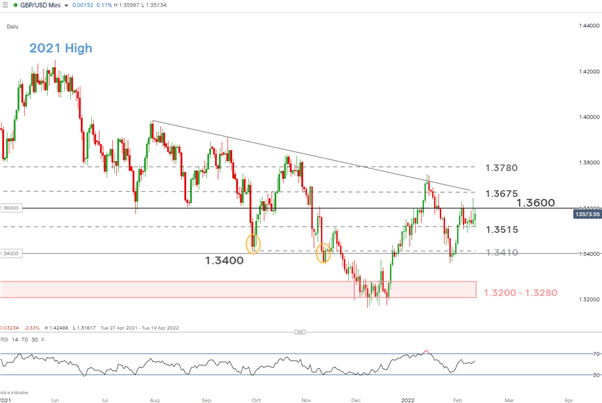 Differences in implied interest rate hikes is easily observable from ECB and BoE rates markets. The ECB has only recently been viewed as hawkish, after ECB President, Christine Lagarde’s press conference at the latest ECB meeting. Nevertheless, the resultant bid in the Euro proved to be short-lived but it did shift market expectations towards a possible rate hike in Q4 of this year. A weaker Euro is likely to persist, particularly as 2 year UK Gilts continue to rise. 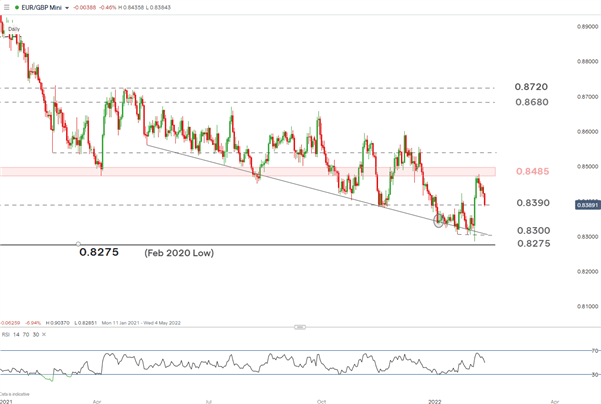