Gold prices rose into the weekend after Federal Reserve Chair Jerome Powell failed to signal a clear timeline on balance sheet tapering. Some expected Mr. Powell to lay out a date on when the central bank will start reducing its weekly pace of asset purchases, a move that is widely seen as prefacing a rate hike. Although, a rate hike would remain dependent on continued progress towards the Fed’s employment goals.

That signal will now more than likely come during September’s FOMC meeting. Markets, along with a growing chorus of Fed members, are calling for a hawkish shift in monetary policy. One prominent Fed member—although not a FOMC voter—Robert Kaplan is confident a September taper signal is appropriate. The Dallas Fed President said, “when we get to the September meeting, we would be well served to announce a plan for adjusting purchases….”

It appears the central bank is being cautious and choreographing its move to start reducing weekly asset purchases. The goal is likely to avoid a taper tantrum, which occurred back in 2013 when a sudden move to rollback purchases took traders by surprise and sent a volatility shock through markets. Gold plunged during the taper tantrum as surging Treasury yields and a US Dollar sapped the yellow metal’s appeal. This approach is likely to cushion gold to the downside, although a tighter monetary policy environment still bodes poorly for the non-asset-bearing instrument.

The late-week gains extended upward price action from earlier in the week when a geopolitical shock boosted the yellow metal’s safe-haven appeal. A terrorist attack in Kabul left dozens of people dead and many more injured on Thursday, including 13 US service members.

Markets may stay on edge given the heightened security posture in Kabul as a massive multi-national airlift operation led by the US continues. US defense officials warned that another complex attack is likely. If one occurs, especially a mass casualty event, it may boost gold once more.

NFP in Focus for Gold Traders

The Fed has made clear that progress in the labor market is key for the central bank to move forward in tightening policy. That said, the August non-farm payrolls report (NFP) will likely be gold’s next major event driver. Analysts expect the figure to cross the wires at 750k, jobs added, with the unemployment rate falling from 5.4% to 5.2%, according to a Bloomberg survey.

A better-than-expected report would likely fuel tightening and taper bets. That may cause the US Dollar to rise alongside Treasury yields, which would work against gold prices. Alternatively, a weaker report could allow gold to capture more upside. In the meantime, gold prices may be dependent on its safe-haven appeal, which puts the intermediate focus on geopolitical risks and broader risk trends. 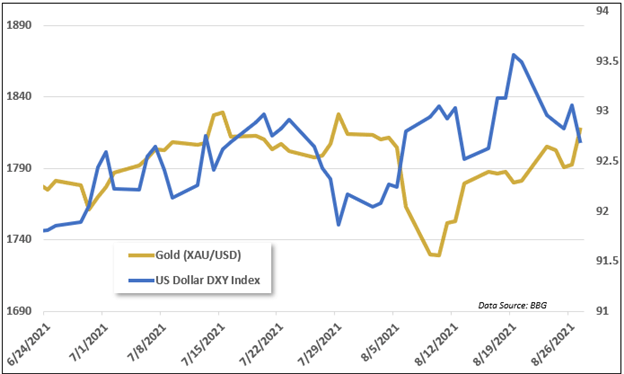